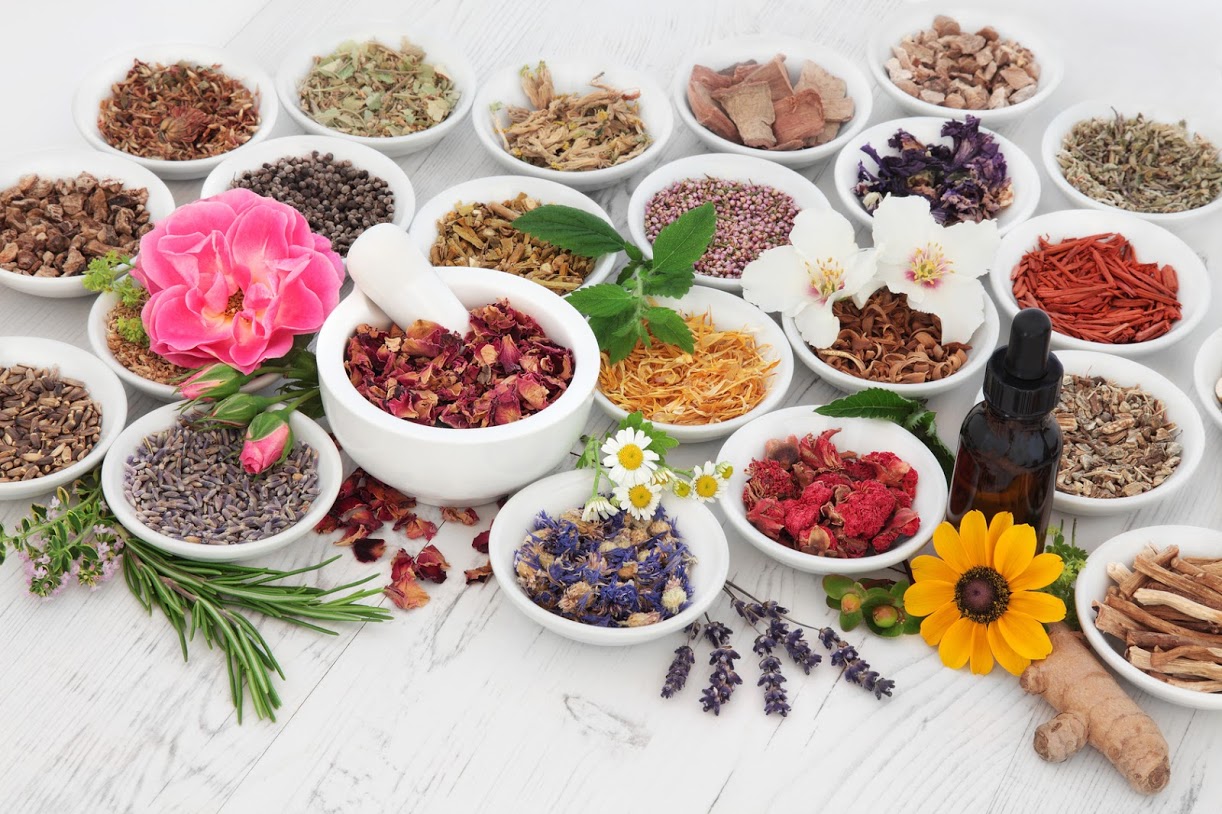 The medicinal effects of certain plants are well known. German chamomile, for example, has been taken to soothe digestive problems for thousands of years, and aloe vera was known to Cleopatra as a healing skin remedy. It is only relatively recently, however, that active constituents responsible for the medicinal actions of plants have been isolated and observed. Knowing a little about the chemicals contained in plants helps you to understand how they work within the body.

Phenols are a very varied group of plant constituents ranging from salicylic acid, a molecule similar to aspirin (acetylsalicylic acid), to complex sugar-containing phenolic glycosides. Phenols are often anti-inflammatory and antiseptic, and are thought to be produced by plants to protect against infection and feeding by insects. Phenolic acids, such as rosmarinic acid, are strongly antioxidant and anti-inflammatory, and can also have antiviral properties. Wintergreen (Gaultheria procumbens) and white willow (Salix alba) both contain salicylates. Many mint family members contain phenols— for example, the strongly antiseptic thymol, found in thyme (Thymus vulgaris).

Volatile oils—which are extracted from plants to produce essential oils—are some of the most important medicinally active plant constituents, and are also used widely in perfumery. They are complex mixtures often of 100 or more compounds, mostly made up of monoterpenes—molecules containing 10 carbon atoms.

Resins—sticky oily substances that seep from plants, for example from the bark of Scots pine (Pinus sylvestris)—are often linked with essential oils (oleoresins) and gums, though they are nonvolatile.

Found widely throughout the plant world, flavonoids are polyphenolic compounds that act as pigments, imparting color, often yellow or white, to flowers and fruits. They have a wide range of actions and many medicinal uses. They are antioxidant and especially useful in maintaining healthy circulation. Some flavonoids also have anti-inflammatory, antiviral, and liver-protective activity.

Flavonoids such as hesperidin and rutin, found in many plants, notably buckwheat (Fagopyrum esculentum) and lemon (Citrus limon), strengthen capillaries and prevent leakage into surrounding tissues. Isoflavones, found for example in red clover (Trifolium pratense), are estrogenic and valuable in treating menopausal symptoms.

Tannins are produced to a greater or lesser degree by all plants. The harsh, astringent taste of tannin-laden bark and leaves makes them unpalatable to insects and grazing animals. Tannins are polyphenolic compounds that contract and astringe tissues of the body by binding with and precipitating proteins—hence their use to “tan” leather.

They also help to stop bleeding and to check infection. Tannin-containing herbs are used to tighten up over-relaxed tissues—as in varicose veins—to dry up excessive watery secretions—as in diarrhea—and to protect damaged tissue—such as skin problems resulting from eczema or a burn. Oak bark (Quercus robur) and black catechu (Acacia catechu) are both high in tannins.

Closely related to tannins and flavonoids, these polyphenolic compounds are pigments that give flowers and fruits a blue, purple, or red hue. They are powerfully antioxidant and free-radical scavengers. They protect the circulation from damage, especially the circulation in the heart, hands, feet, and eyes. Blackberry (Rubus fruticosus), red grapes (Vitis vinifera), and hawthorn (Crataegus oxycantha) all contain appreciable quantities of these proanthocyanins.

Coumarins of different kinds are found in many plant species and have widely divergent actions. The coumarins in melilot (Melilotus officinalis) and horse chestnut (Aesculus hippocastanum) help to keep the blood thin, while furanocoumarins such as bergapten, found in celery (Apium graveolens), stimulate skin tanning, and khellin, found in visnaga (Ammi visnaga), is a powerful smooth-muscle relaxant.

The main active constituents in many key medicinal plants, saponins gained their name because, like soap, they make a lather when placed in water. Saponins occur in two different forms—steroidal and triterpenoid. The chemical structure of steroidal saponins is similar to that of many of the body’s hormones, for example estrogen and cortisol, and many plants containing them have a marked hormonal activity.

Anthraquinones are the main active constituents in herbs such as senna (Cassia senna) and Chinese rhubarb (Rheum palmatum), both of which are taken to relieve constipation. Anthraquinones have an irritant laxative effect on the large intestine, causing contractions of the intestinal walls and stimulating a bowel movement approximately 10 hours after being taken. They also make the stool more liquid, easing bowel movements.

Found in various medicinal plants, notably in foxgloves (see common foxglove, Digitalis purpurea) and in lily of the valley (Convallaria majalis), cardiac glycosides such as digitoxin, digoxin, and convallotoxin have a strong, direct action on the heart, supporting its strength and rate of contraction when it is failing. Cardiac glycosides are also significantly diuretic. They help to stimulate urine production, thus increasing the removal of fluid from the tissues and circulatory system.

Though these glycosides are based on cyanide, a very potent poison, in small doses they have a helpful sedative and relaxant effect on the heart and muscles. The bark of wild cherry (Prunus serotina) and the leaves of elder plant (Sambucus nigra) both contain cyanogenic glycosides, which contribute to the plant’s ability to suppress and soothe irritant dry coughs. Many fruit kernels contain high levels of cyanogenic glycosides, for example those of apricot (Prunus armeniaca).

Found in all plants, polysaccharides are multiple units of sugar molecules linked together. From an herbal point of view, the most important polysaccharides are the “sticky” mucilages and gums, which are commonly found in roots, bark, leaves, and seeds. Both mucilage and gum soak up large quantities of water, producing a sticky, jelly-like mass that can be used to soothe and protect irritated tissue, for example, dry irritated skin and sore or inflamed mucous membranes in the gut.

Mucilaginous herbs, such as slippery elm (Ulmus rubra) and linseed or flaxseed (Linum usitatissimum), are best prepared by soaking (macerating) in plenty of cold water. Some polysaccharides stimulate the immune system, for example acemannan, which is found in the leaves of aloe vera (Aloe vera).

Found exclusively in species of the mustard and cabbage family, glucosilinates have an irritant effect on the skin, causing inflammation and blistering. Applied as poultices to painful or aching joints, they increase blood flow to the affected area, helping to remove the buildup of waste products (a contributory factor in many joint problems).

On eating, glucosilinates are broken down and produce a strong, pungent taste. Radish (Raphanus sativus) and watercress (Nasturtium officinale) are typical glucosilinate-containing plants.

Bitters are a varied group of constituents linked only by their pronounced bitter taste. The bitterness itself stimulates secretions by the salivary glands and digestive organs. Such secretions can dramatically improve the appetite and strengthen the overall function of the digestive system. With the improved digestion and absorption of nutrients that follow, the body is nourished and strengthened.

A very mixed group, alkaloids mostly contain a nitrogen-bearing molecule (-NH2) that makes them particularly pharmacologically active. Some are well-known drugs and have a recognized medical use. Vincristine, for example, derived from Madagascar periwinkle (Vinca rosea), is used to treat some types of cancer.

Other alkaloids, such as atropine, found in deadly nightshade (Atropa belladonna), have a direct effect on the body, reducing spasms, relieving pain, and drying up bodily secretions.

Though often overlooked, many medicinal plants contain useful levels of vitamins. Some are well known for their vitamin content, for example dog rose (Rosa canina) has high levels of vitamin C, and carrot (Daucus carota) is rich in betacarotene (pro-vitamin A), but many are less well recognized.

Watercress (Nasturtium officinale), for example, contains appreciable levels of vitamins B1, B2, C, and E as well as beta-carotene, while sea buckthorn (Hippophae rhamnoides) can be regarded as a vitamin and mineral supplement in its own right.

Like vegetable foods, many medicinal plants provide high levels of minerals. Plants, especially organically grown ones, draw minerals from the soil and convert them into a form that is more easily absorbed and used by the body. Whether plants are eaten as a vegetable, like cabbage (Brassica oleracea), or taken as a medicine, like bladderwrack (Fucus vesiculosus), in many cases the mineral content is a key factor in the plant’s therapeutic activity within the body.

Dandelion leaf (Taraxacum officinale) is a potent diuretic, balanced by its high potassium content, while the high silica content of horsetail (Equisetum arvense) supports the repair of connective tissue, making it useful in arthritis.