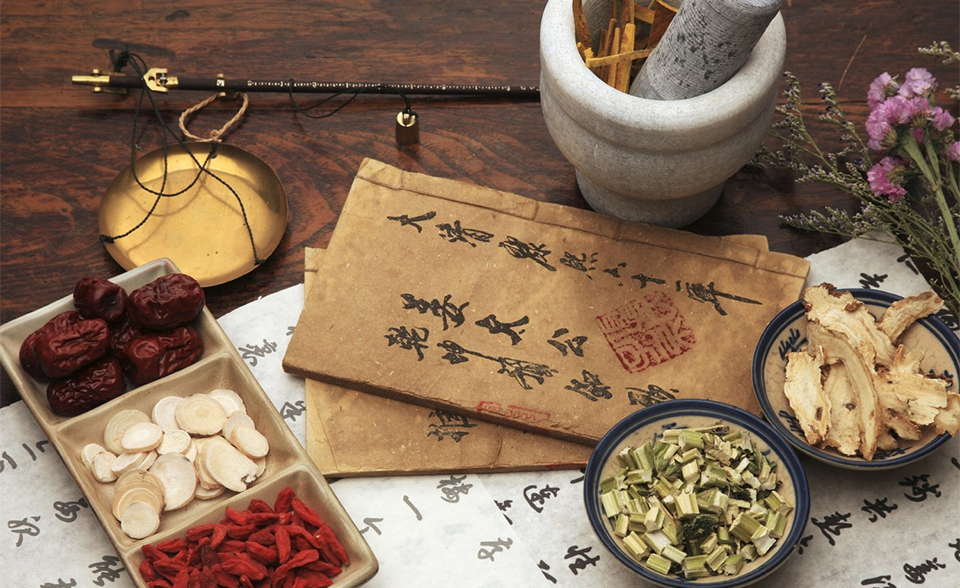 China’s ancient herbal tradition has survived intact into the 21st century, and in China it is now accorded equal status with Western conventional medicine. Today, many Chinese universities teach and research herbal medicine, a factor of crucial importance in the reemergence of herbalism worldwide.

Traditional Chinese medicine (TCM) and the herbal tradition that is part of it developed separately from Chinese folk medicine. It arose from ideas recorded between 200 BCE and 100 CE in the Yellow Emperor’s Classic of Internal Medicine (Huang Di Nei Jing). This text is based on detailed observations of nature and a deep understanding of the way that all life is subject to natural laws. It contains concepts that are fundamental to TCM, including yin and yang; the five elements (wu xing); and the theory of the effect of nature upon health.

In TCM, living in harmony with these principles is the key to good health and longevity. According to the Yellow Emperor’s Classic, members of previous generations lived for a hundred years, and had constitutions so strong that illness was cured by incantations alone. Only later, as human vitality, or qi, declined and people became “overactive…going against the joy of life,” did herbal medicine, acupuncture, and other branches of TCM become necessary.

Unlike other herbal traditions that have a unified theory for making sense of illness and disease (for example, the European theory of the four humors), TCM has two quite different systems—the yin and yang theory and the five elements. They developed quite separately in China, and the five elements system was only accepted and fully incorporated into Chinese medicine during the Song dynasty (960–1279 CE). To this day, differences between these theories are reflected in practitioners’ approaches to

In Chinese thought, everything in the universe is composed of yin and yang—words that were first used to denote the dark and light side of a valley. Everything has yin and yang aspects, or complementary opposites—such as day and night, up and down, wet and dry. Every yin or yang category can itself also be subdivided—so that while the front of the body is yin relative to the back, which is yang, the abdomen is yin relative to the chest, which is yang.

The five elements theory associates constituents of the natural world—wood, fire, earth, metal, and water—with other fundamentals such as seasons, emotions, and parts of the body. Each element gives rise to the next in a perpetual fashion (see diagram above). For this reason, the system might be more accurately described as the five phases, representing the process of continual movement in life. The five elements have a central role in Chinese herbal medicine, especially in the grouping of tastes of herbs and parts of the body.

The ancient five elements theory is used by the Chinese when writing prescriptions. It associates herbs with the natural world, including elements, seasons, and parts of the body. In the circular movement, each element gives rise to the next (for example, winter gives rise to spring). The five-angled movement is a controlling one, in which each element restrains another.

Instead of looking for causes of illness, Chinese practitioners seek patterns of disharmony, which are expressions of imbalance between yin and yang. Particular attention is given to reading the pulse and tongue, both of which are very important for an accurate diagnosis. Ill health results from a deficiency or excess of either yin or yang.

A cold, for example, is not just the result of a virus (though this clearly is a cause), but a sign that the body is not adapting to external factors such as “wind-heat,” “wind-cold,” or “summer-heat.” A high temperature denotes too much yang and shivering is the result of an excess of yin. The art of the Chinese herbal practitioner is to restore harmony between yin and yang both within the patient’s body and between the patient and the world at large.

Over the centuries, the number of medicinal herbs has grown, and the 1977 Encyclopedia of Traditional Chinese Medicinal Substances has 5,757 entries, the majority of which are herbs. The Communist Revolution in 1949 helped swell the number of plants used in TCM, because herbs that had previously only been employed in folk medicine were incorporated into the tradition.

As the herbal tradition developed within TCM, the taste and other characteristics of herbs became closely linked with their therapeutic uses. The Divine Husbandman’s Classic (Shen’nong Bencaojing, 1st century CE) lists 252 herbal medicines specifying their tastes and “temperatures,” and today, Chinese herbalists still relate the taste and temperature of an herb directly to its therapeutic use. Sweet-tasting herbs such as ginseng (Panax ginseng) are prescribed to tone, harmonize, and moisten, while bitter tasting herbs such as dan shen (Salvia miltiorrhiza) are employed to drain and dry excess “dampness.”

Hot-tasting herbs are used for treating “cold” conditions and vice versa. Together, an herb’s taste and temperature link it to specific types of illness. For example, Baical skullcap (Scutellaria baicalensis), which is bitter-tasting and “cold,” is a drying, cooling herb for conditions such as fever and irritability, brought on by patterns of excess heat.

The Chinese tradition relies heavily on formulas, which are set mixtures of herbs that have proven effectiveness as tonics or remedies for specific illnesses. Many are available over the counter and are used by millions of people every day in China and around the world.

Chinese herbalists often take a formula as a starting point and then add other herbs to the mixture. There are hundreds of formulas, one of the most famous being “Four Things Soup,” a tonic given to regulate the menstrual cycle and tone the reproductive system. It consists of dong quai (Angelica sinensis), rehmannia (Rehmannia glutinosa), chuang xiong (Ligusticum wallachii), and white peony (Paeonia lactiflora).

Chinese herbal medicine uses tinctures or alcoholic extracts of herbs, but only infrequently. Generally, patients are given mixtures of roots and bark to take as decoctions two or three times a day.

The Chinese Influence in Japan & Korea

Japan and Korea have been strongly influenced by Chinese medical ideas and practices. Kampoh, traditional Japanese medicine, traces its origins back to the 5th century CE, when Buddhist monks from Korea introduced their healing arts, largely derived from Chinese medicine, into Japan. In the following century, the Empress Suiko (592–628 CE) sent envoys to China to study that country’s culture and medicine.

Direct Chinese influence on Japanese medicine, which was practiced for the most part by the monks, continued for 1,000 years. In the 16th century, Japan started to assert its cultural identity, and kampoh developed its own characteristic traits, emphasizing the Japanese ideals of simplicity and naturalness.

However, certain Chinese concepts, such as yin and yang and ki (qi), continued to have a central role. In 1868, the Japanese embraced Western conventional medicine. Formal training in kampoh officially ceased in 1885, but a few committed practitioners passed their knowledge on to younger generations, keeping the tradition alive.

In the last 40 years the number of medical practitioners who use kampoh within their practice has greatly increased. Many Japanese medical schools now include training in kampoh as part of the curriculum. Korean herbal medicine is very similar to mainstream Chinese herbal medicine, and almost all the Chinese herbs are used in Korea. Ginseng (Panax ginseng) has been cultivated in Korea for home use and export since 1300.

Since 1949 when the Communists gained control, the herbal tradition has flourished in China and today it is recognized as a valid medical system, available to the Chinese on an equal footing with conventional Western medicine. As is often the case elsewhere, herbs seem to be used mainly for chronic conditions, while Western medicine is more frequently employed for serious acute illness.

Chinese herbal medicine, however, is not just of significance in China and the surrounding regions, but is practiced by trained practitioners in every continent and, in some countries, now has official government recognition. For example, there has been a traditional Chinese medicine hospital in Paris since 1996, and in 2013 the French government agreed to open three new traditional Chinese medicine hospital centers. Herbal medicine is now taught in 34 Chinese universities. This development (and the massive input of resources involved) has helped revitalize herbal medicine around the world over the past 30 to 40 years.

The impact of these developments has not been confined solely to those taking herbal medicines—whether in China or elsewhere. In 2015 Dr. Tu Youyou, a researcher trained in traditional Chinese medicine and conventional medicine, was awarded the Nobel Prize for medicine for her lifelong study of sweet Annie (Artemisia annua) and its key active constituent artemisinin. From her base at the Academy of Traditional Chinese Medicine in Beijing, she proved that the herb (and its active constituent) had unusually potent antimalarial activity. Artemisinin has now become the standard treatment for acute malaria.