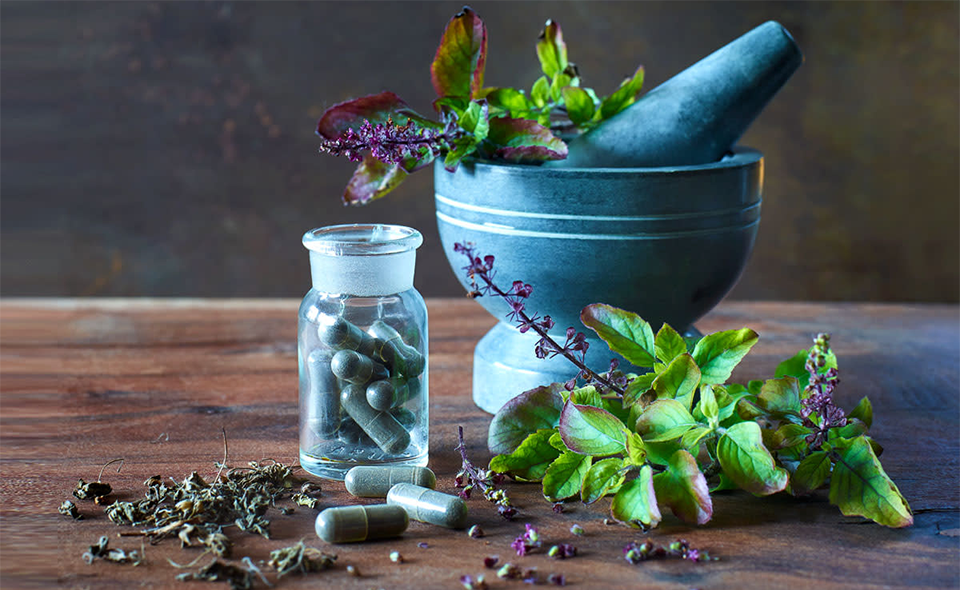 In India and the neighboring regions, a variety of herbal traditions continue to flourish. Ayurveda is the main system of healing in India, but Unani Tibb, traditional Arabic medicine, and Siddha, practised in Tamil areas of southern India and Sri Lanka, are also major herbal traditions.

The name Ayurveda derives from two Indian words: ayur meaning longevity, and veda meaning knowledge or science. Ayurveda is as much a way of life as a system of medicine, and encompasses science, religion, and philosophy. Its ultimate aim, drawing on its many different practices—yoga and meditation, for example—is to promote self-realization and a harmonious relationship with the world.

Ancient Indian culture developed around 5,000 years ago along the banks of the Indus river in northern India. This is thought of as a time of great spiritual enlightenment, with knowledge and wisdom being transmitted orally from teacher to student over many generations, and eventually set down in Sanskrit poetry known as the Vedas. These writings, dating from approximately 1500 BCE, distilled the prevailing historical, religious, philosophical, and medical knowledge, and form the basis of Indian culture.

The most important of these texts are the Rig Veda and the Atharva Veda. In about 400 BCE, the first Ayurvedic medical school was founded by Punarvasu Atreya. He and his pupils recorded medical knowledge in treatises that would in turn influence Charaka, the scholar who is thought to have written the Charaka Samhita. This compendium of writings, in the form that it has come down to us, dates from around 100 CE and describes 341 plant medicines as well as medicines of animal and mineral origin. The second major work was the Susruta Samhita, dating from around the same time; it displays detailed knowledge of surgery, especially plastic surgery, and is still consulted today.

The Influence of Ayurveda

Other traditions of medicine share common roots with Ayurveda, and Ayurveda has some claim to being the oldest surviving medical tradition in the world. From the time of the Buddha (563–483 BCE) onward, Ayurvedic medical ideas and practices spread across Asia, accompanying the spread of Buddhism itself. Buddhism, and Ayurvedic approaches to medicine, strongly influenced the development of Tibetan medicine, and these ideas in turn combined fruitfully with traditional Chinese medicine.

Ancient civilizations of East and West were linked to one another by trade routes, campaigns, and wars. In each case, this led to the exchange of ideas, medicinal plants, and medical practices, including fertile connections between Ayurveda, Siddha, and traditional Chinese medicine to the east, and ancient Greek and Roman medicine to the west.

Later, from around 700 CE, traditional Greek medicine, based on Hippocratic ideas, developed in the Arabic world as classical Greek texts were translated into Arabic. This tradition, known as Unani Tibb (meaning “Ionian medicine,” referring to the island of Iona where Hippocrates lived), at one time spanned from India to Spain, and is still the main form of herbal medicine practiced by hakims in the Middle East.

Ayurveda is a unique holistic system, based on the interaction of body, mind, and spirit. In Ayurveda, the origin of all aspects of existence is pure intellect or consciousness. Energy and matter are one. Energy is manifested in five elements—ether, air, fire, water, and earth—which together form the basis of all matter. In the body, ether is present in the cavities of the mouth, abdomen, digestive tract, thorax, and lungs.

Air is manifested in the movements of the muscles, pulsations of the heart, expansion and contraction of the lungs, and the workings of the digestive tract and the nervous system. Fire is manifested in the digestive system, metabolism, body temperature, vision, and intelligence. Water is present in the digestive juices, salivary glands, mucous membranes, blood, and cytoplasm. Earth exists in the nails, skin, and hair, as well as in the elements that hold the body together: bones, cartilage, muscles, and tendons.

The five elements manifest in the functioning of the five senses, and they are closely related to our ability to perceive and interact with the environment in which we live. In Ayurveda, ether, air, fire, water and earth correspond to hearing, touch, vision, taste, and smell respectively.

The five elements combine to form three basic forces, known as the tridoshas, which exist in everything in the universe, and influence all mental and physical processes. From ether and air, the air principle vata is created; fire and water yield the fire principle pitta; and earth and water produce the water principle kapha. The principles correspond closely to the three humors of Tibetan medicine and somewhat resemble Galen’s theory of the four humors.

According to Ayurveda, we are all born with a particular balance of doshas. The proportions are largely determined by the balance of doshas in our parents at the time of our conception. Our body type, temperament, and susceptibility to illnesses are largely governed by the predominant dosha. In this way we inherit our basic constitution, called the prakruti, which remains unaltered throughout our lives.

The first requirement for health in Ayurveda is a proper balance of the doshas. If the balance is upset, illness, ryadhi, results. The disruption may be manifested in physical discomfort and pain, or in mental and emotional suffering, including jealousy, anger, fear, and sorrow. While our balance of doshas influences vulnerability to certain kinds of illness, the principles do not work in a vacuum.

The effect our lifestyle has on our prakruti—vakruti—has a strong effect on overall health, and it may easily disrupt dosha balance. Illness may also result if the flow of energy, prana, around the body is interrupted. The flow is relayed via the seven chakras (psychic energy centers), which are situated at various points along the spinal column, from the crown of the head to the tailbone. If the energy flowing between these centers is blocked, the likelihood of ill health increases.

An Ayurvedic practitioner first carefully assesses prakruti and vakruti—constitution and lifestyle. This involves taking a detailed case history and carefully examining the body, paying attention to the build, the lines in the face and hands, and skin and hair type—all of which point to more profound aspects of the patient’s condition. However, the main foundations on which diagnosis rests are the appearance of the tongue, and the pulse rate. In these respects, Ayurveda has much in common with Chinese and Tibetan medicine, in which these two indicators are also of the greatest importance. A very complex technique for taking the patient’s pulse has been developed by Ayurvedic practitioners, requiring many years’ experience.

When a dosha imbalance has been diagnosed, medical treatment and lifestyle advice are provided. The first step is eliminating toxins, and the main cleansing and rejuvenation program, known as panchakarma, includes therapeutic vomiting, purging, enemas, nasal administration of medication, and purification of the blood.

Subsequent treatments fall into three main categories: medicines from natural sources, dietary regimens, and behavioral modifications. Medicines, foods, and lifestyle activities are all classified according to their effect on the three doshas. For instance, a health problem associated with an excess of kapha, the water principle, is characterized by congestion, excess weight, fluid retention, and lethargy. The practitioner would prescribe the consumption of warm, dry, light foods, because the quality of kapha is cool and damp.

Avoidance of cold damp foods (such as wheat, sugar, and milk products), which increase kapha, would also be advised. Herbal remedies would include warming spices such as ginger (Zingiber officinale) and cayenne (Capsicum frutescens), as well as bitters such as turmeric (Curcuma longa).

In addition to plant extracts, Ayurvedic medicines include honey and dairy produce, and sometimes minute doses of minerals such as salt are added. Remedies take the form of pills, powders, balms, and infusions, and most contain several different ingredients, all carefully balanced to individual needs.

Treatment might include washes and enemas or the application of poultices as well as massage with warm herbal oil, burning incense, the use of precious stones and metals, and ritual purification for imbalanced mind and emotions. The chanting of mantras (incantations based on sacred texts), breathing, and meditation exercises may be advised, due to the power of sound and the effect of vibration and meditation on the body, mind, and spirit.

In the 19th century, the British dismissed Ayurveda as mere superstition, and in 1833 they closed all Ayurvedic schools and banned the practice. Great centers of Indian learning thus fell apart, and Ayurvedic knowledge retreated into villages and temples. At the turn of the century, however, some Indian physicians and enlightened Englishmen began to reevaluate Ayurveda, and by the time of India’s independence in 1947 it had regained its reputation as a valid medical system.

Today, Ayurveda flourishes side by side with Unani Tibb and Western conventional medicine and is actively encouraged by the Indian government as an inexpensive alternative to Western drugs. In recent years, Ayurveda has attracted increasing attention from medical scientists in the West and in Japan, and the World Health Organization has resolved to promote its practice in developing countries.

Ayurveda’s value lies in the fact that it is not a medical science dealing solely with treatment of disease. Instead, it offers practical guidelines that apply to every facet of daily existence. It also seeks to reconcile health and lifestyle with universal aspects of existence, and to enhance well-being and promote longevity.