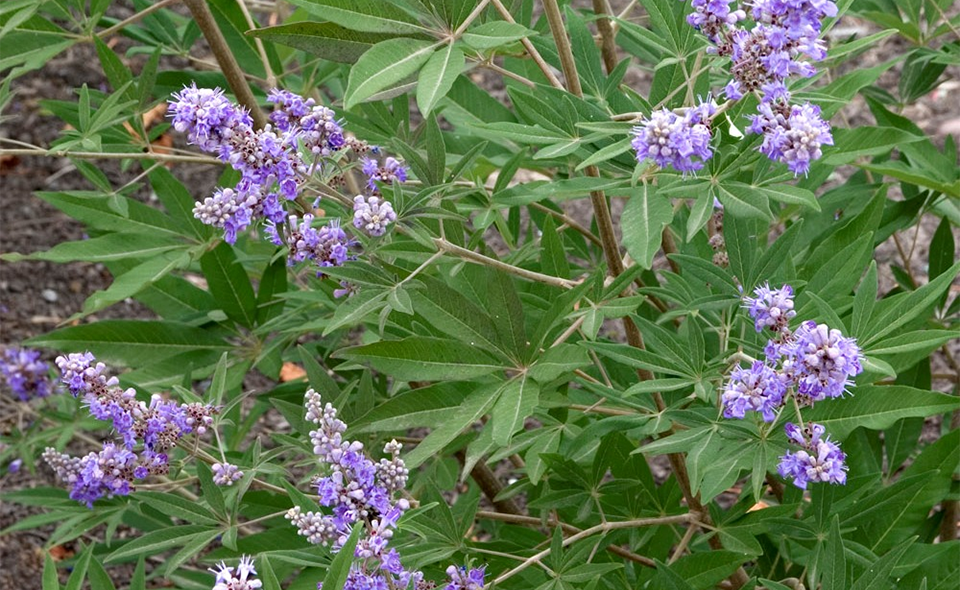 Chaste tree was well known in ancient times and featured in Homer’s 6th-century BCE epic, the Iliad, as a symbol of chastity capable of warding off evil. As the name “chaste tree” implies, it was thought to reduce sexual desire, and traditionally it was chewed by monks to reduce unwanted libido. Research has confirmed that chaste tree has a hormonal action, and today it is used for menstrual problems and infertility.

Chaste tree is native to the Mediterranean region and western Asia. It is cultivated in subtropical areas around the world, and has become naturalized in many regions. It is grown from seed in spring or autumn. The ripe berries are collected in autumn.

As a member of the Verbenaceae genus, chaste tree is a distant relative of vervain (Verbena officinalis) and lemon verbena (Lippia citriodora).

Hormonal properties: The berries are thought to induce subtle hormonal effects within the brain, leading to increased levels of the neurotransmitters dopamine and melatonin. These changes are thought to promote better hormonal regulation of the menstrual cycle, notably through raised progesterone levels. In some people, the raised melatonin levels may aid sleep quality. The diterpenes are thought to be chiefly responsible for these effects.

Gynecological problems: Clinical research by and large supports the use of chaste tree in many female hormonal problems, including premenstrual syndrome (PMS), irregular menstruation, breast tenderness, and infertility. A 2001 clinical trial tested chaste berry against placebo in 178 women with PMS. After 3 months, those taking chaste tree had a 50% reduction in symptoms compared to placebo.

Infertility: Chaste tree can be of help to some women trying to conceive if infertility is due to low progesterone levels.

Difficulty in breastfeeding: The berries are taken to increase breast milk production.

Acne: Though rarely used on its own, chaste tree can be extremely helpful in treating acne in both men and women. Used in combination with herbs such as Echinacea (Echinacea spp.), it will often reduce the frequency and intensity of acne blemishes where hormonal imbalance is a major factor.