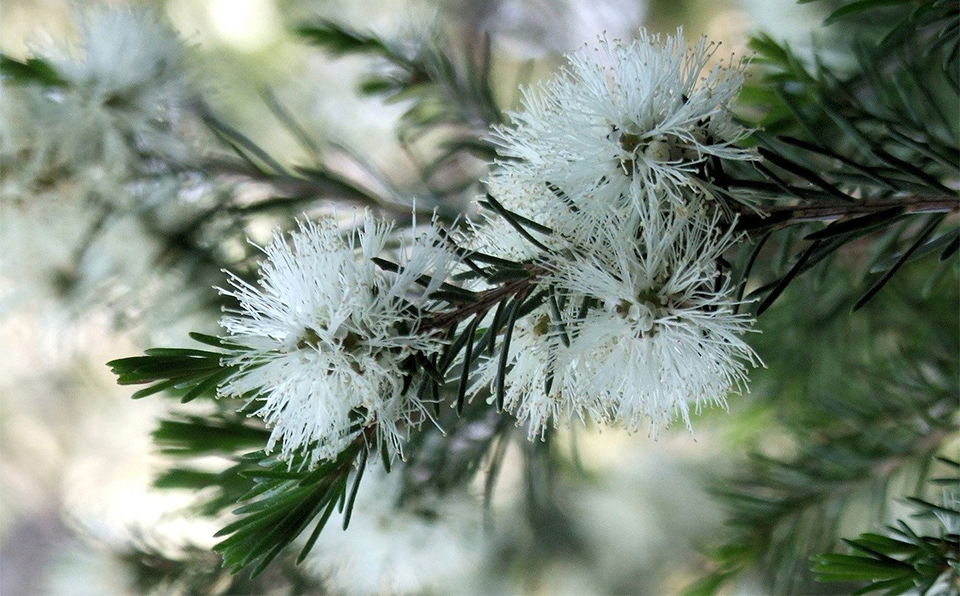 Tea tree, and in particular its essential oil, is one of the most important natural antiseptics. Useful for stings, burns, wounds, and skin infections of all kinds, the herb merits a place in every medicine chest. Tea tree is native to Australia and is a traditional remedy of the Aborigines. Its therapeutic properties were first researched during the 1920s, and it is now widely used in Europe and the U.S., as well as in Australia.

Tea tree is native to Australia, flourishing in moist soils in northern New South Wales and Queensland. It is now cultivated extensively, especially in New South Wales. Tea tree is grown from cuttings in summer. The leaves and small branches are picked throughout the year and distilled to produce essential oil.

Antiseptic properties: Tea tree essential oil was first researched in 1923 in Australia. Since the 1960s it has been intensively investigated, and its antiseptic properties are well established. Clinical trials, mainly in Australia, have shown that it is effective at treating a broad range of infectious conditions, especially fungal and skin problems such as vaginal yeast, acne, and warts.

Active constituents: One of the most important constituents is known to be terpinen-4-ol, which is significantly antiseptic and well tolerated by the skin. The oil also contains cineol, which can irritate the skin. The cineol content varies—poor-quality oil has more than 10%; in some cases up to 65%.

Traditional remedy: Tea tree is a traditional Aboriginal remedy. The leaves are crushed and either inhaled or used in infusions for coughs, colds, and skin infections.

Skin problems: Tea tree can be applied to skin infections such as athlete’s foot and ringworm, as well as to corns, warts, acne, and boils, infected burns, wounds, insect bites and stings, and other skin conditions.

Chronic infections: Tea tree may be taken internally as a treatment for chronic, and some acute, infections, notably cystitis, glandular fever, and chronic fatigue syndrome.

Oral infections: The herb is effective in mouthwashes, countering oral infection and gum disease, and it can also be used as a gargle for sore throats.

Vaginal infections: Tea tree is an excellent remedy for vaginal irritation and infection, including yeast infections. It may be used as a pessary or can be diluted in a carrier cream and then applied.