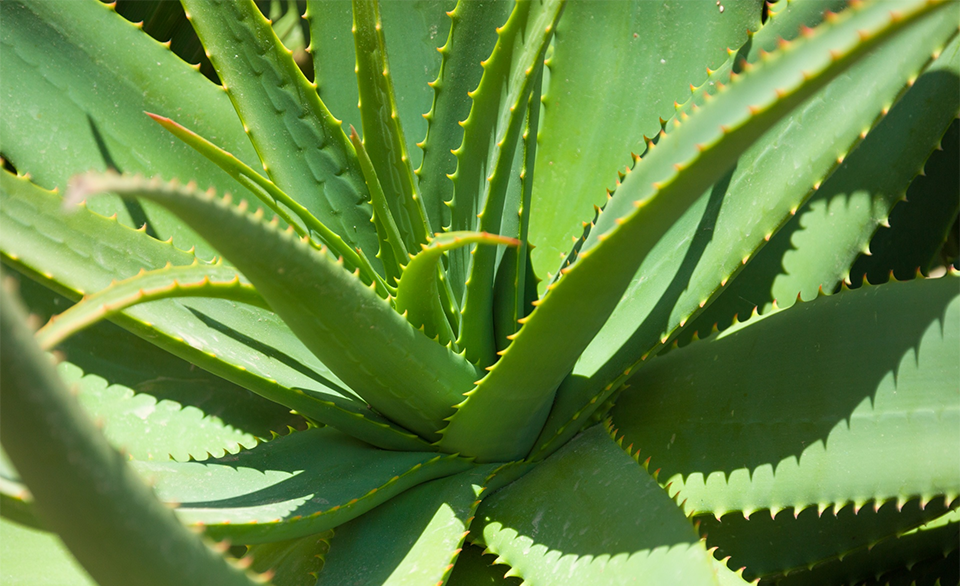 Native to Africa, aloe vera is commonly cultivated as a potted plant and has two distinct types of medicinal use. The clear gel contained in the leaf is a remarkably effective healer of wounds and burns, speeding up the rate of healing and reducing the risk of infection. The yellow sap from the base of the leaf when dried is known as “bitter aloes.” It is a strong laxative, useful for short-term constipation.

Native to eastern and southern Africa, aloe vera grows wild in the tropics and is cultivated extensively worldwide. (Aloe vera plants grown as potted plants have a low anthraquinone content.) Aloe vera is propagated by breaking off small rooted plantlets. To collect the gel and bitter liquid, the leaves are cut and drained.

Cape aloes (A. ferox) is used in herbal medicine as an irritant laxative. Many other Aloe species are also useful medicinally.

Healing properties: Extensive research since the 1930s in the U.S. and Russia has shown that the clear gel has a dramatic ability to heal wounds, ulcers, and burns, putting a protective coat on the affected area and speeding up the rate of healing. This action is in part due to the presence of aloectin B, which stimulates the immune system.

Beauty treatment: Aloe vera has a long history as a skin lotion—Cleopatra is said to have attributed her beauty to it.

Western remedy: In the West, aloe vera first became popular in the 1950s when its ability to heal burns, in particular radiation burns, was discovered.

First aid: Aloe vera is an excellent first aid remedy for burns, scrapes, scalds, and sunburn. A leaf, broken off, releases soothing gel, which may be applied to the affected part.

Skin conditions: The gel is useful for almost any skin condition that needs soothing and astringing, and will help varicose veins to some degree.

Ulcers: The protective and healing effect of aloe vera also works internally, and the gel can be used for peptic ulcers and irritable bowel syndrome.

Laxative: The bitter yellow liquid in the leaves (bitter aloes) contains anthraquinones, which are strongly laxative. They cause the colon to contract, generally producing a bowel movement 8–12 hours after consumption. At low doses, the bitter properties of the herb stimulate digestion. At higher doses, bitter aloes are laxative and purgative.