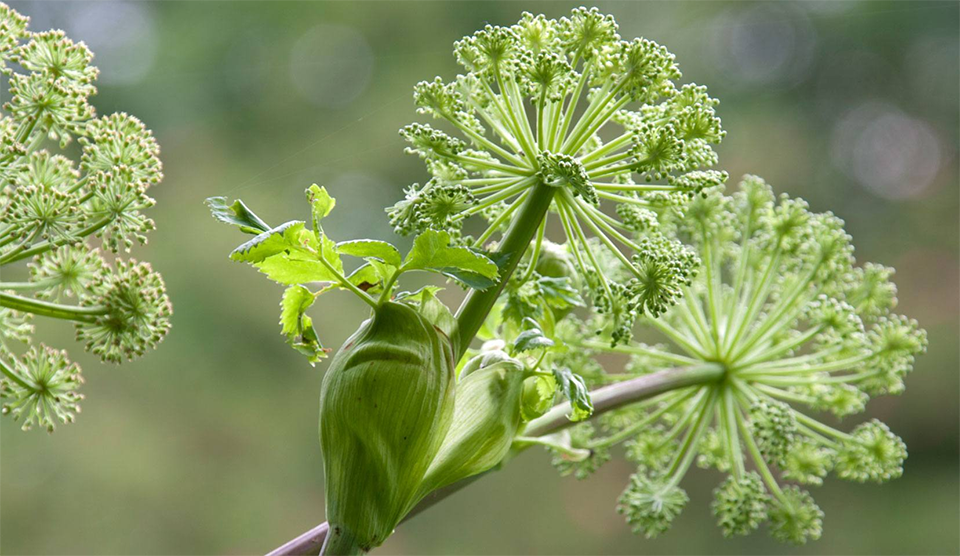 Angelica grows in temperate regions in western Europe, Siberia, and the Himalayas. It prefers damp sites and is often found near running water. Leaves and stems are harvested in early summer, seeds as they ripen in late summer, and roots in late autumn after one year’s growth.

Angelica root contains a volatile oil (consisting mainly of beta-phellandrene), lactones, and coumarins. An extract of the root has been shown to be anti-inflammatory.

The British Flora Medica (1877) reports that “the Laplanders considered this plant as one of the most important productions of the soil … They are subject to a severe kind of colic, against which the root of angelica is one of their chief remedies.” The stems are candied for culinary use.

Angelica is a warming and tonic remedy, having a role to play in a wide range of illnesses. All parts of the plant will help relieve indigestion, gas, and colic. Angelica can also be useful in cases of poor circulation, as it improves blood flow to the peripheral parts of the body.

It is considered a specific treatment for Buerger’s disease, a condition that narrows the arteries of the hands and feet. By improving blood flow and stimulating the coughing up of phlegm, angelica’s warm, tonic properties bring relief from bronchitis and debilitating conditions affecting the chest. For respiratory conditions, the roots are most commonly used, but the stems and seeds may be employed as well.

Do not take as a medicine during pregnancy. Do not confuse with Chinese Angelica.