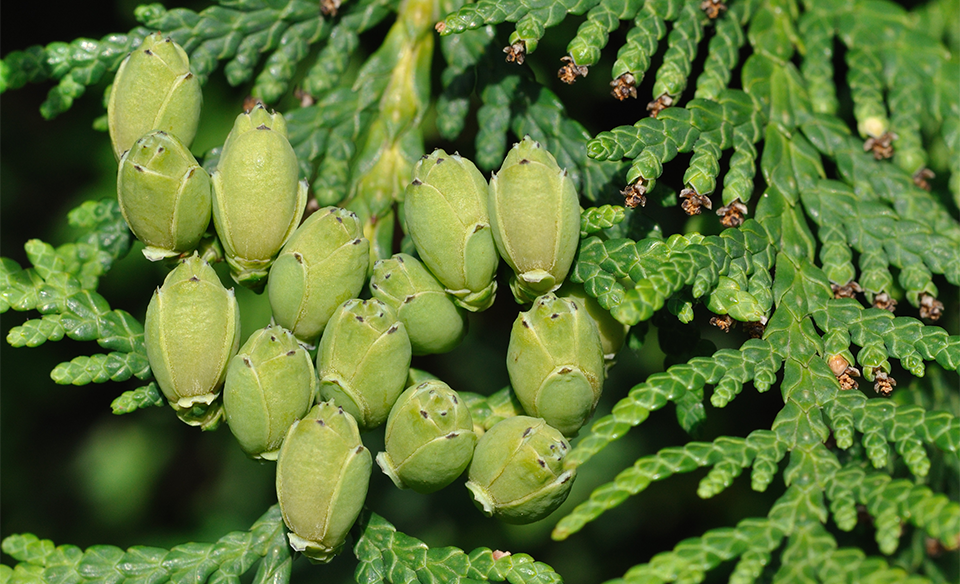 Native to the northeastern U.S. and also known as white cedar, arborvitae flourishes in wet, marshy ground and along riverbanks. It has become a popular ornamental tree in Europe. The leaves are gathered in summer.

Arborvitae contains a volatile oil (up to 60% thujone), coumarins, flavonoids (including procyanidin), tannins, and polysaccharides.

Many Native American peoples prized arbor-vitae as a medicine for fever, headaches, coughs, swollen hands, and rheumatic problems. The herb was burned as a smudge (smoky fire) for its scent and to ward off evil spirits. The 19th-century Eclectic herbalists used arbor-vitae as a remedy for bronchitis, rheumatism, and uterine cancer. Arborvitae has also been used to treat the side-effects of the smallpox vaccination.

Arborvitae has an established antiviral activity. It is most often used to treat warts and polyps, being prescribed both internally and externally for these conditions. It is also used as part of a regime for treating cancer—especially cancer of the uterus. Arborvitae makes an effective expectorant and anti-congestion remedy, and may be used to treat acute bronchitis and other respiratory infections.

It induces menstruation and can be taken to bring on delayed periods, though this use is inadvisable if menstrual pain is severe. Arborvitae is diuretic and is used to treat acute cystitis and bed-wetting in children. Extracts of the herb may be painted on painful joints or muscles as a counter-irritant, improving local blood supply and easing pain and stiffness.

Take only under professional supervision. Do not take arborvitae during pregnancy or while breastfeeding.