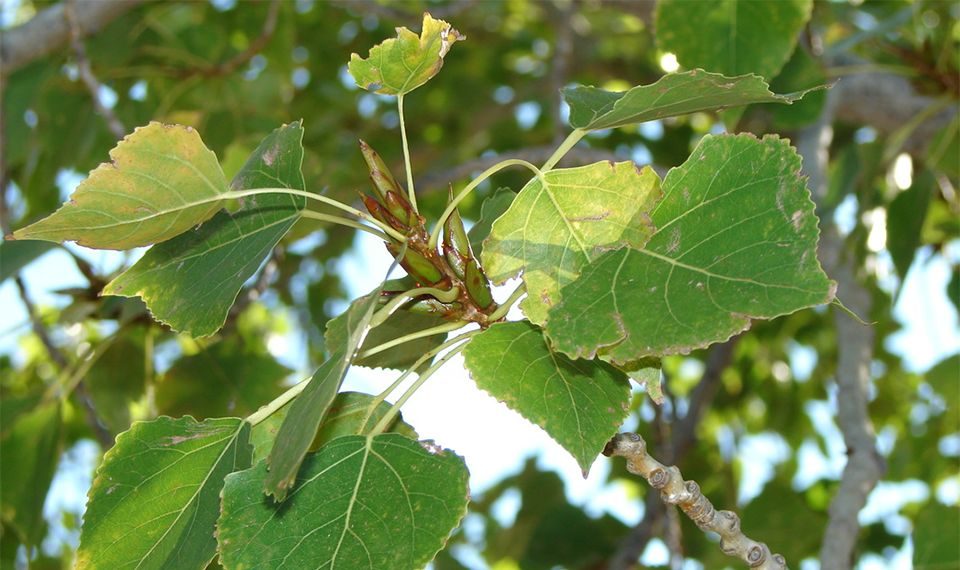 Naturalized in northern temperate regions, balm of Gilead is also cultivated as an ornamental tree. The buds and bark from young branches are collected in spring.

Balm of Gilead buds contain flavonoids, phenolic glycosides (including salicin), and fatty acids. Salicin’s analgesic, anti-inflammatory, and fever-reducing actions resemble those of aspirin. Many poplars have a similar chemical profile and are often used interchangeably as medicines.

Balm of Gilead has been used for several thousand years to soothe inflamed or irritated skin. The 17th-century herbalist Nicholas Culpeper recorded that “The ointment called populeon, which is much of this poplar, is singular for all heat and inflammation in any part of the body and tempereth the heat of wounds: It is much used to dry up the milk in women’s breasts.”

Balm of Gilead is a common ingredient of cough mixtures. Its expectorant, antiseptic, and analgesic properties make it an excellent remedy for sore throats, dry irritable coughs, bronchitis, and other respiratory ailments. In France and Germany, balm of Gilead is applied as a salve to scrapes, small wounds, chapped and itchy skin, sunburn, chilblains, and hemorrhoids. A preparation of balm of Gilead, applied externally, may also help relieve the pain of rheumatic joints and strained muscles. As Culpeper noted, the plant is also thought to reduce breast-milk production.

Studies have demonstrated that balm of Gilead buds have significant expectorant, antibacterial, anti-fungal, and anti-inflammatory properties. Research undertaken into the bud resin of this and other poplar species has been prompted largely by the resin’s chemical similarity to propolis, a natural antibiotic resin that is gathered by bees.

Best avoided while breastfeeding. Do not take if allergic to aspirin.