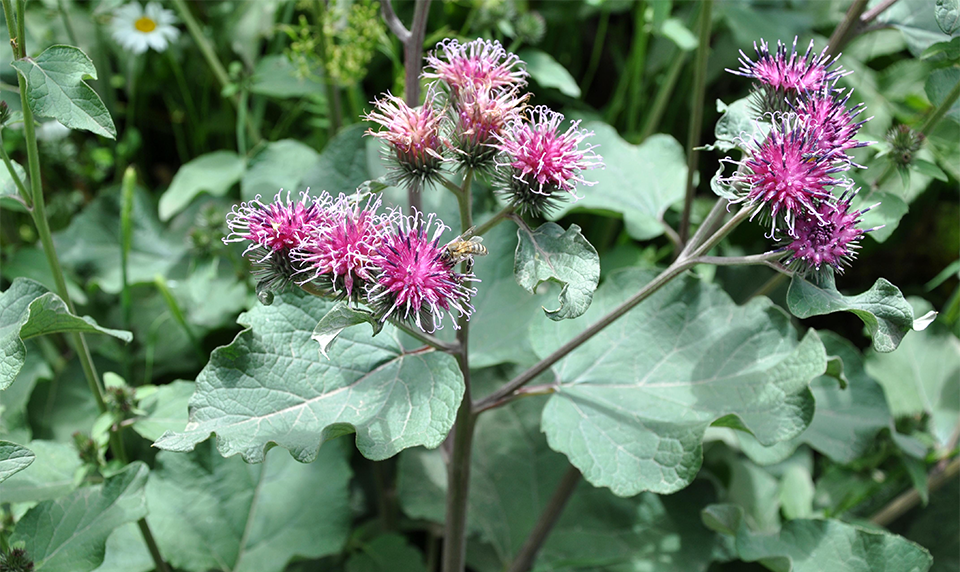 Burdock is one of the foremost detoxifying herbs in both Western and Chinese herbal medicine. It is used to treat conditions caused by an “overload” of toxins, such as throat and other infections, boils and rashes, and chronic skin problems. The root and the seeds help to cleanse the body of waste products, and the root is thought to be particularly good at helping to eliminate heavy metals.

Native to Europe and Asia, burdock now grows in temperate regions throughout the world, including the U.S. Burdock is also cultivated in Europe and China and is propagated from seed in spring. The seeds are harvested in summer and the whole plant is unearthed in high summer.

A. minus and A. tomentosum are related species that are used in a similar way to burdock.

Antibiotic: Studies in Germany (1967) and Japan (1986) showed that the polyacetylenes, especially within the fresh root, have an antibiotic effect.

Other research: Burdock has antibacterial and antifungal properties, and diuretic and hypoglycemic (lowering blood-sugar levels) effects. It also seems to have an anti-tumor action. Recent studies suggest the seeds are anti-inflammatory, antioxidant, and hepatoprotective.

History: Burdock was a traditional remedy for gout, fevers, and kidney stones. In the 17th century, Culpeper wrote, “The seed is much commended to break the stone and cause it to be expelled by urine.” Burdock in its first year produces a rosette of large leaves. Infusion of seeds (to make, p. 291). Use as a wash for acne and boils.

Cleansing herb: Burdock is used in both Western and Chinese herbal medicine as a detoxifying herb. The seeds are used to remove toxins in fevers and infections such as mumps and measles, and the root helps the body to eliminate waste products in chronic skin and arthritic conditions.

Skin problems: Burdock’s diuretic, antibiotic, and mildly bitter actions make it helpful for skin disorders, especially where toxicity is a key factor, such as in acne, abscesses, local skin infections, eczema, and psoriasis.

Combination remedies: Burdock is rarely used on its own in remedies. It is generally mixed with herbs such as dandelion (Taraxacum officinale) or yellow dock (Rumex crispus). These help the body to remove accumulated waste products drawn out of tissues by burdock’s detoxifying action. Use of burdock alone can cause a flare-up of skin conditions such as eczema.