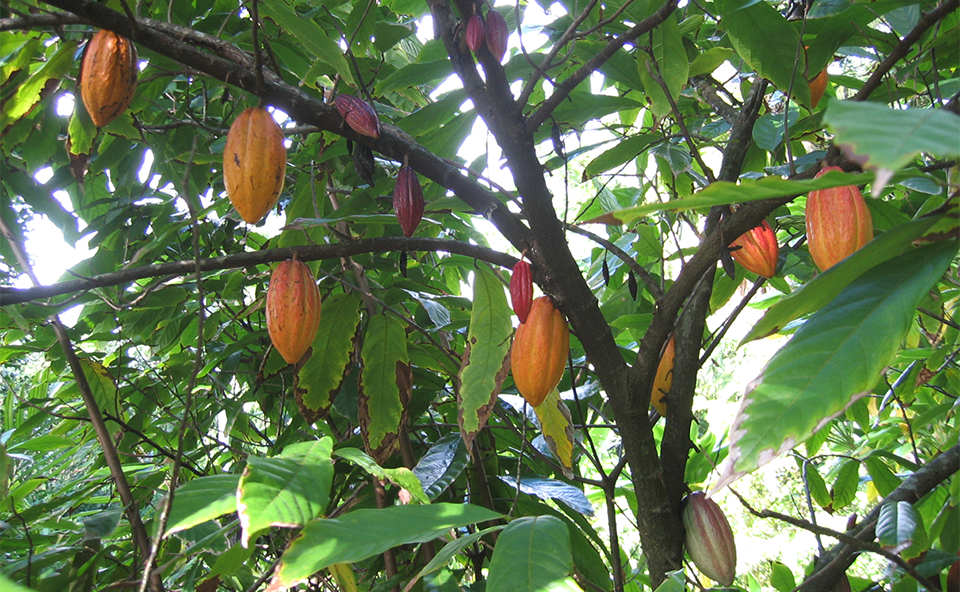 Native to Mexico and Central America, cacao is now a major crop throughout the tropics. The seed pods are harvested several times a year and are cut directly from the trunk of the tree (where they grow). One pod contains up to 50 beans, with roughly 900 weighing 2¼ lb (1 kg). According to the World Cocoa Foundation, world production of cacao in 2012 was more than 3.8 million tons.

The unprocessed seed pulp contains high levels of polyphenols (mostly proantocyanidins and catechins), xanthines (including caffeine), a fixed oil, and many constituents responsible for chocolate’s flavor. Due to fermentation and the processing involved, chocolate has significantly reduced levels of polyphenols. Minute quantities of endorphins (powerful painkillers that occur naturally within the body) are also present in cacao.

The word “chocolate” derives from chócolatl, the name given to this tree by the Aztecs. In 1720, Cotton Mather, an American preacher and natural historian, praised cacao, writing that the plant “supplies the Indian with bread, water, wine, vinegar, brandy, milk, oil, honey, sugar, needles, thread, linen, clothes, caps, spoons, besoms, baskets, paper, and nails; timber, coverings for their houses; masts, sails, cordage for their vessels; and medicine for their diseases; and what can be desired more?”

Though cacao is most often used as a food, it also has therapeutic value as a nervous system stimulant. In Central America and the Caribbean, the seeds are taken as a heart and kidney tonic. The plant may be used to treat angina, and as a diuretic. Cacao butter (the fixed oil) makes a good lip salve and is often used as a base for suppositories and pessaries.

The potent mix of polyphenols in the unprocessed seed pulp has been the main focus of research into cacao. These have a protective activity on the heart and blood vessels, particularly supporting the capillaries or microcirculation. Cacao consumption is linked with lower blood pressure and cholesterol levels, as well as a reduced risk of coronary heart disease and stroke.

It also appears to have an anti-diabetic activity, stimulating the pancreas to regulate blood sugar levels more effectively. Other potential uses of cacao that have been investigated include the prevention of tooth decay, as an aid to weight loss, as a cancer-preventative food within the diet, and as a treatment for chronic fatigue.