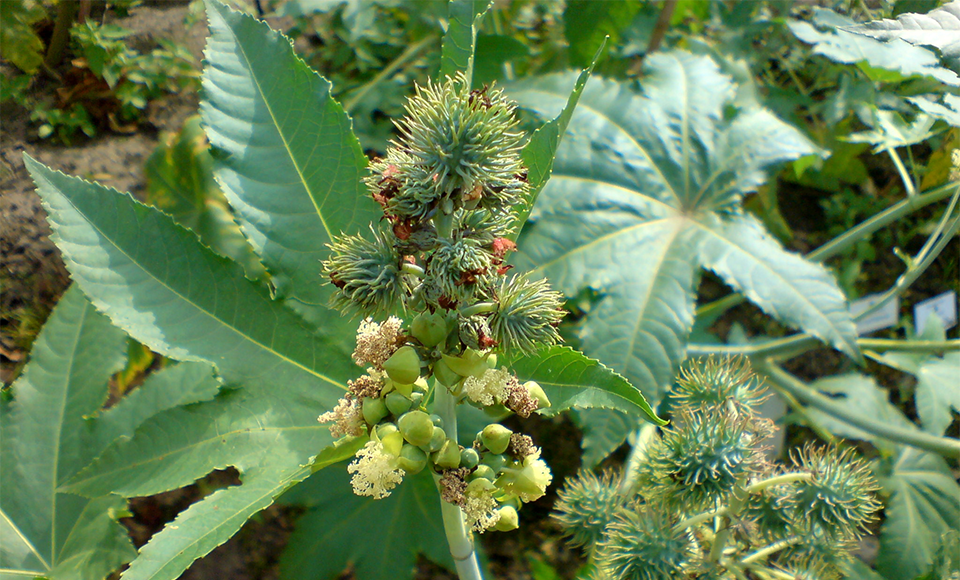 Evergreen shrub growing to about 33 ft (10 m) in its natural state, but a much smaller annual when cultivated. Has large, palm-shaped leaves, green female flowers, and prickly red seed capsules.

Castor oil plant is probably native to eastern Africa. It is cultivated in hot climates around the world. The seed capsules are gathered throughout the year when nearly ripe and are then put out in the sun to mature.

The seeds contain 45–55% fixed oil, which consists mainly of glycerides of ricinoleic acid, ricin (a highly toxic protein), ricinine (an alkaloid), and lectins. The seeds are highly poisonous—2 are sufficient to kill an adult—but the toxins do not pass into the expressed oil.

Castor oil has been used medicinally for about 4,000 years. Until recently, it was a common remedy given regularly to children “to help keep the system clear.” Owing to its unpleasant taste, castor oil is remembered as the bane of many childhoods.

Castor oil is well known for its strongly laxative (and, in higher doses, purgative) action, prompting a bowel movement about 3–5 hours after ingestion. The oil is so effective that it is regularly used to clear the digestive tract in cases of poisoning.

Castor oil is well tolerated by the skin, and it is sometimes used as a vehicle for medicinal and cosmetic preparations. In India, the oil is massaged into the breasts after childbirth to stimulate milk flow. Indian herbalism uses a poultice of castor oil seeds to relieve swollen and tender joints. In China, the crushed seeds are used to treat facial palsy.

Do not ingest the seeds, which are extremely poisonous. Do not take castor oil during pregnancy, and do not take more often than once every few weeks as a treatment for constipation.