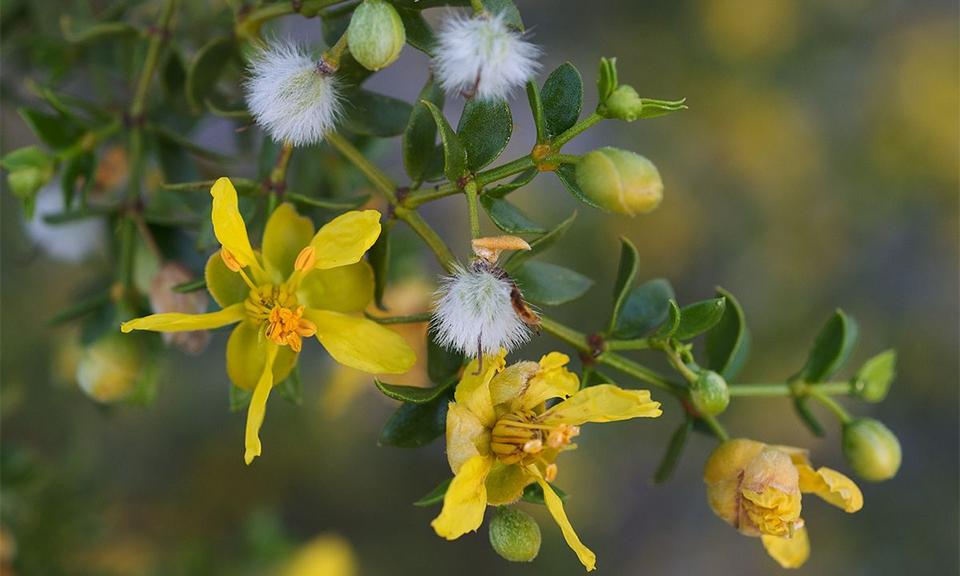 Chaparral is found in large numbers in the deserts of the southwestern U.S. and Mexico.

Chaparral contains about 12% resin and lignans, including nordihydroguaiauretic acid. The latter is reportedly harmful to the lymph glands and kidneys, though recent research shows that it has beneficial antidiabetic properties. U.S. research published in 1996 demonstrated that other lignans have antiviral activity against HIV.

Widely used by Native Americans, chaparral was taken in the form of a decoction to treat stomach troubles and diarrhea. Young twigs were used for toothache. The leaves were applied as a poultice for respiratory problems and as a wash for skin problems.

Until the 1960s, chaparral remained in wide use in the U.S., with an average of 10 tons (9.07 tonnes) consumed each year. It was thought to be a beneficial remedy for rheumatic disease, venereal infections, urinary infections, and certain types of cancer, especially leukemia. Chaparral was also taken internally for skin afflictions such as acne and eczema, and applied as a lotion to sores, wounds, and rashes.

In the early 1990s, sales of chaparral were banned in the U.S. and Britain due to concern over its potential toxic effect on the liver. It now seems likely that this is another herb that can, in rare cases, cause liver damage, as with some conventional medicines. In view of the uncertainty about its safety, any potential benefit from taking the herb must be weighed against the risks.

The North American L. divaricata, a close relative of chaparral, contains lignans, which have been shown to inhibit lymphoid tumor growth with no apparent harmful effect on normal lymphatic tissue.