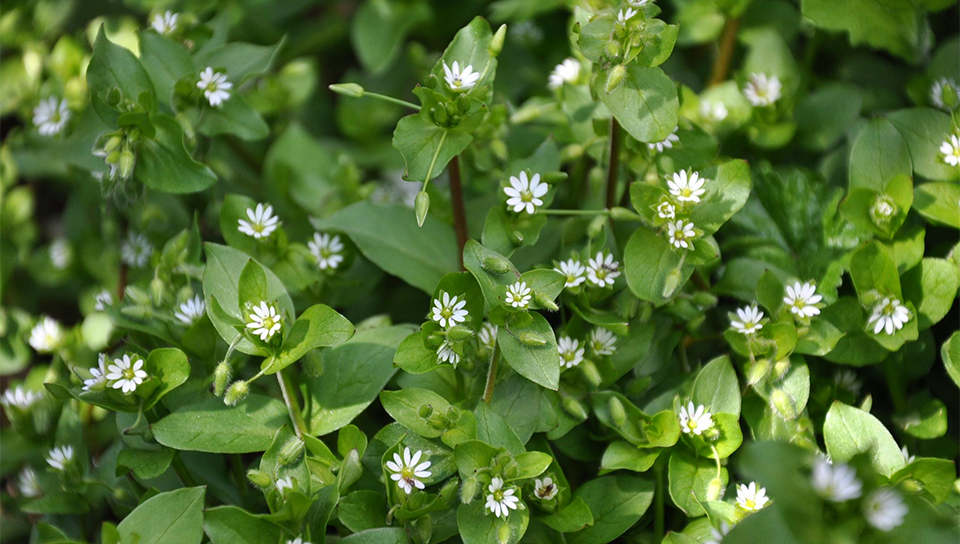 Sprawling perennial growing to about 6 in (15 cm). Has hairy stems, oval leaves, and starlike white flowers.

Native to Europe and Asia, chickweed is now found in most regions of the world. It grows easily in wasteground, and is generally regarded as a troublesome weed. The plant is harvested in summer.

Dioscorides, a Greek physician writing in the 1st century CE, described chickweed’s applications as follows: “it [chickweed] may usefully be applied with corn meal for inflammation of the eyes. The juice may also be introduced into the ear in earache.” Apart from its medicinal uses, chickweed is a tasty and nutritious vegetable.

Chickweed is chiefly used to treat irritated skin, being applied as juice, poultice, ointment, or cream. In certain cases, chickweed may soothe severe itchiness where all other remedies have failed. It is often used to relieve eczema, varicose ulcers, and nettle rash (hives). An infusion of the fresh or dried plant may be added to a bath, where the herb’s emollient properties will help to reduce inflammation—in rheumatic joints, for example—and encourage tissue repair. Chickweed may also be taken internally to treat chest ailments. There is some suggestion that chickweed has an anti-obesity action.

If taken in excessive doses, chickweed may cause diarrhea and vomiting. Do not take during pregnancy.