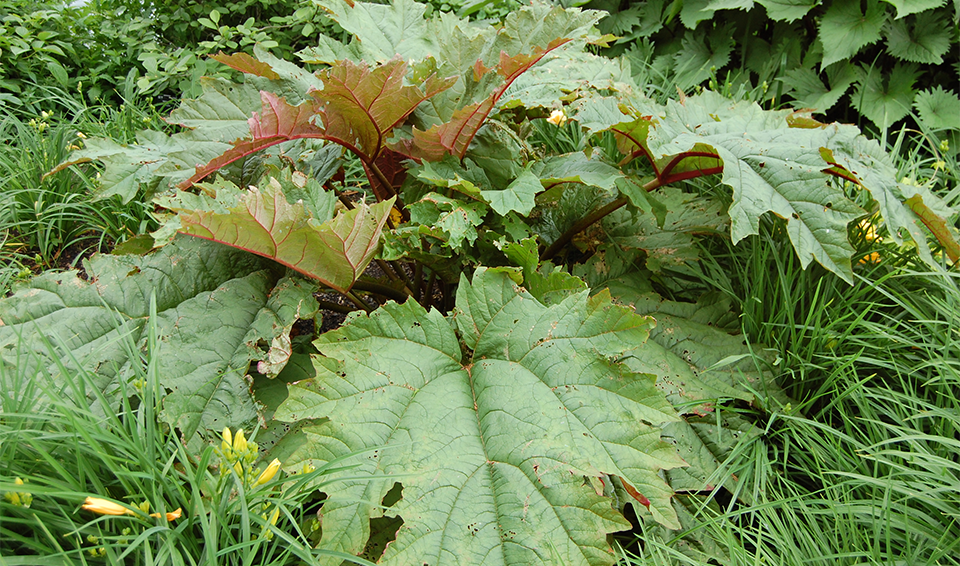 Chinese rhubarb has long been prized as the most useful purge in herbal medicine, safe even for young children due to its gentle action. It has been used in China for over 2,000 years and is an extremely effective treatment for many digestive problems. Paradoxically, it is a laxative when taken in large doses but has a constipating effect in small measures. The rhizome has an astringent, unpleasant taste.

Native to China and Tibet, where the best-quality herb is still found, Chinese rhubarb now also grows in the West. It is found in the wild and is widely cultivated. It is grown from seed in spring or by root division in spring or autumn and requires a sunny position and well-drained soil. The rhizomes of 6–10-year-old plants are dug up in the autumn after the stem and leaves have turned yellow.

R. tanguticum and R. officinale have similar uses to R. palmatum. These 3 species are considered to be superior in action to other rhubarbs. The familiar, edible rhubarb is R. rhaponticum.

Anthraquinones & tannins: Chinese rhubarb’s medicinal value is largely due to the irritant, laxative, and purgative properties of the anthraquinones, and in large doses the rhizome is strongly laxative. A 2007 Chinese study concluded that the anthraquinones in rhubarb “possess promising anticancer properties and could have a broad therapeutic potential.”

Antibacterial properties: Decoctions of the root have been shown to be effective against Staphylococcus aureus, an infectious bacterium that causes mouth ulcers and folliculitis (an acne-type infection of the beard area). In laboratory studies, rhubarb has been found to have notable activity against Helicobacter pylori, a bacterium that causes stomach ulcers.

History: Chinese rhubarb was first mentioned in the 1st-century CE Chinese text The Divine Husbandman’s Classic, and has been grown in the West since 1732. It is one of the few herbs still used today in conventional as well as herbal medicine, and is listed in the British Pharmacopoeia of 1988.

Constipation: Large doses of Chinese rhubarb are combined with carminative herbs and taken as a laxative, helping to clear the colon without causing excessive cramping. This is useful for treating constipation where the muscles of the large intestine are weak.

Diarrhea: Small doses of the root are astringent, relieving irritation of the inner lining of the gut, thus reducing diarrhea.

Other uses: Chinese rhubarb can be applied to burns, boils, and carbuncles. The herb acts as a tonic and mild appetite stimulant and serves as a useful mouthwash for mouth ulcers.