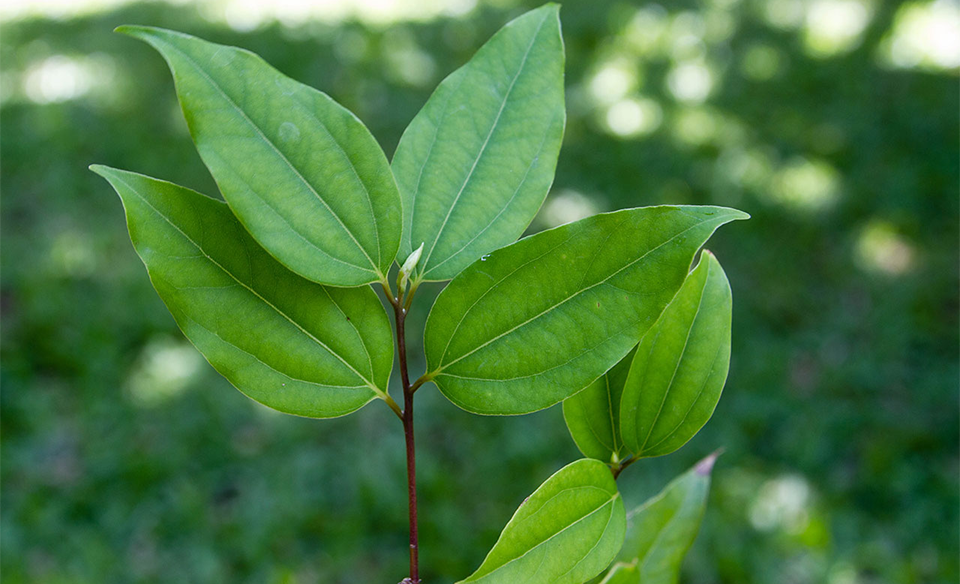 One of the world’s most important spices, cinnamon is an ancient medicine, first mentioned in the Jewish religious text, the Torah. The bark has a long history of use in India and Southeast Asia, and is thought to have arrived in Egypt around 2000 BCE, reaching Europe around 500 BCE. Traditionally used to treat colds, flu, and digestive problems, cinnamon is now commonly taken to help stabilize blood-sugar levels.

Cinnamon (C. zeylanicum) is native to India and Sri Lanka, growing in tropical forests to an altitude of 1,600 ft (500 m). It is widely cultivated throughout tropical regions, especially in the Philippines and the Caribbean.

The tree is propagated from cuttings and every second year, the young trees are cut back to just above ground level. The bark is stripped from the shoots that emerge the following year, and the inner layer is set out to dry in the sun, forming the characteristic quills.

Several species are used besides “true” cinnamon (C. zeylanicum and C. verum). Cassia (C. cassia), native to China and Japan, is used as a yang tonic in Chinese herbal medicine. Cassia is the most commonly used species in commerce.

Metabolic syndrome: Research suggests the bark helps to prevent and treat type 2 (late-onset) diabetes, increasing cells’ ability to respond to insulin and aiding the stabilization of blood-sugar levels. It also helps to reduce high blood pressure and may slightly lower cholesterol, so it could be key to treating metabolic syndrome.

Other uses: Similarities of the phenolic procyanidins to grape seed (Vitis vinifera) and green tea (Camellia sinensis) indicates cinnamon is strongly antioxidant and aids healthy circulation. The essential oil is sedative, analgesic, and has marked antimicrobial and anti-fungal activity. There are hints that cinnamon helps brain health.

Ancient warming remedy: Cinnamon has always been used as a warming herb for “cold” conditions, often in combination with ginger (Zingiber officinale). The bark stimulates circulation and blood flow to the extremities. It has long been used for flu symptoms, and makes an excellent mouthwash for conditions such as oral thrush.

Convalescence: Cinnamon is a gentle-acting herb that helps to support both digestion and circulation. It is used specifically in the treatment of debility and in convalescence.

Gynecological remedy: It can help relieve period cramps and might have a normalizing effect on menstrual bleeding—controlling heavy bleeding but stimulating flow where it is light. It is valuable in the treatment of PCOS (polycystic ovary syndrome) as it helps to reduce insulin levels and stabilize estrogen levels.

Insulin resistance: It has a distinct role to play in promoting better blood glucose levels and in preventing insulin resistance—the impaired uptake of sugar by cells that is a warning sign of diabetes. One suggestion, as part of a wider regimen for diabetes and metabolic syndrome, is to take 3 tsp of cinnamon powder a day for 4 months.

Gastrointestinal problems: It has always been used as a warming and soothing remedy for digestion, aiding in nausea, indigestion, and flatulence, as well as colic and diarrhea. Its anti-fungal activity means that it can be of value in gut dysbiosis (disordered gut bacteria).