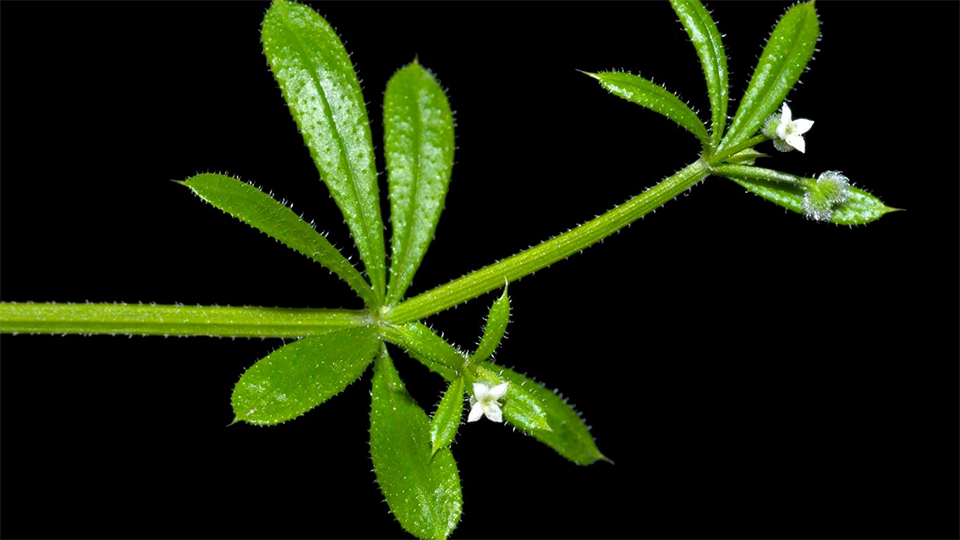 Straggling, square-stemmed annual growing to a height of 4 ft (1.2 m) with whorls of lance-shaped leaves, clusters of small white flowers, and small, round, green fruit with hooked prickles.

Common throughout Europe and North America, cleavers is found in many other temperate regions, including in Australia. It grows prolifically in gardens and along roadsides, and is gathered when just about to flower in late spring.

Cleavers contains iridoids (including asperuloside), polyphenolic acids, anthraquinones (only in the root), alkanes, flavonoids, and tannins. Asperuloside is a mild laxative.

The name cleavers refers to the plant’s ability to cling (or cleave) to fur or clothing. Dioscorides, a Greek physician of the 1st century CE, considered it useful for countering weariness, and described how shepherds used the stems to make sieves for straining milk.

A valuable diuretic, cleavers is often taken for skin diseases such as seborrhea, eczema, and psoriasis; for swollen lymph glands; and as a general detoxifying agent in serious illnesses such as cancer. The plant is commonly prepared in the form of an infusion, but for conditions such as cancer, it is best taken as a juice, which is strongly diuretic. The juice and the infusion are also taken for kidney stones and other urinary problems.

According to French research (1947), an extract of the plant appears to lower blood pressure.

The Mexican G. orizabense is used by the Mazatecs to treat intestinal parasites and to relieve fever. G. umbrosum from New Zealand has been used to treat gonorrhea. See also lady’s bedstraw (G. verum).