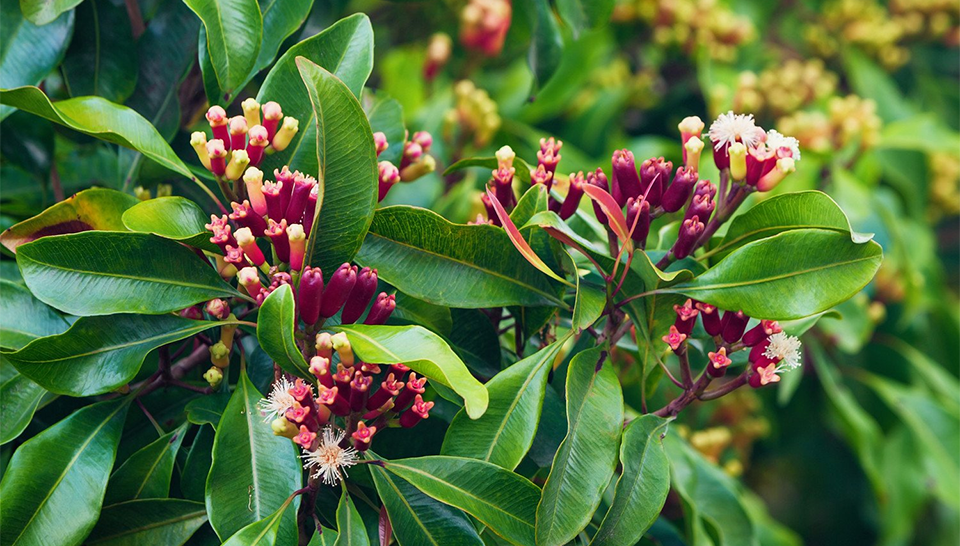 Cloves, the dried flower buds of the clove tree, are best known as a spice, but are also highly valued as an herbal medicine, particularly in India and Southeast Asia. Native to the Molucca Islands, cloves were one of the earliest spices to be traded and were imported into Alexandria in 176 CE. The cloves contain the best essential oil, but the stems and leaves of the tree can also be distilled for their oil.

Originally from the Molucca Islands (Indonesia) and the southern Philippines, cloves are now grown extensively in Tanzania and Madagascar, and to a lesser extent in the West Indies and Brazil. The tree is grown from seed in spring or from semi-ripe cuttings in summer. Twice a year, the unopened flower buds are picked as they develop, and then sun-dried.

Volatile oil: Argentinian research in 1994 showed clove’s volatile oil to be strongly antibacterial. Eugenol (a phenol) is the largest and most important component of the volatile oil. It is strongly anesthetic and antiseptic, and therefore useful in pain relief for toothache, and as an antiseptic for many conditions.

Acetyl eugenol: Acetyl eugenol, another component of the volatile oil, has been shown to be strongly antispasmodic.

Ancient all-purpose remedy: Cloves have been used in Southeast Asia for thousands of years and were regarded as a panacea for almost all ills.

Antiseptic: The antiseptic property of cloves makes them useful for treating certain viral conditions. In tropical Asia, they have often been given to treat infections such as malaria, cholera, and tuberculosis, and parasites such as scabies.

Mind & body stimulant: Cloves are a stimulant, both to the mind (improving memory) and to the body as a whole, and have been used as an aphrodisiac in India and in the West. The herb has also been used to prepare for childbirth. It helps stimulate and strengthen uterine muscle contractions in labor.

Additional uses: Besides all their other uses, cloves can be used to treat acne, skin ulcers, sores, and styes. They also make a potent mosquito and clothes moth repellent. Oranges that had been studded with cloves were used in the Moluccas as insect repellents.

Western herbalism: Despite the bewildering variety of their therapeutic uses, cloves are underrated in the West. They are used regularly only in mouthwashes, and for their local anesthetic effect, for example in relieving toothache.