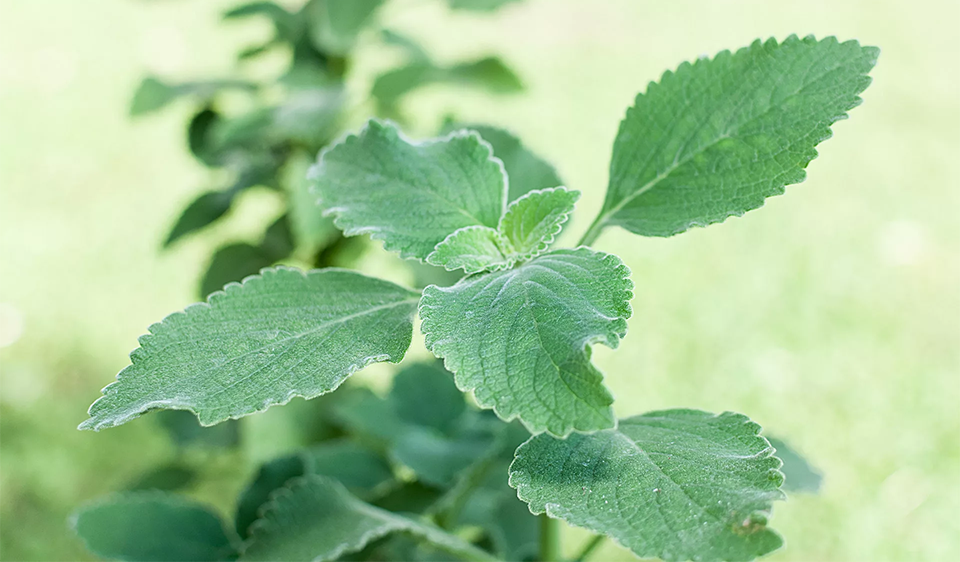 Native to India, coleus is used in Indian folk medicine rather than within the Ayurvedic tradition, and is a traditional digestive remedy. It shot to fame in Western medical circles when one of its constituents, forskolin, was first isolated in the 1970s. Research by an Indian/German company showed that forskolin was a powerful medicine for various conditions, including heart failure, glaucoma, and bronchial asthma.

Native to India, coleus grows on the dry slopes of the Indian plains and in the foothills of the Himalayas. It is also found in subtropical or warm temperate areas, including Nepal, Sri Lanka, Myanmar (Burma), and parts of eastern Africa. Coleus was popular as an ornamental in the 19th century. Today it is cultivated on a large scale in Gujarat, India, for use in pickles—around 980 tons (1,000 tonnes) are harvested each year.

The plant is propagated by stem cuttings or root division in spring or summer and flourishes in well-drained soil in sun or partial shade. Both root and leaves are harvested in autumn.

Six other species of Coleus have been investigated but only C. forskohlii contains forskolin. Indian borage (C. amboinicus) is used traditionally within Ayurvedic and Unani Tibb herbal medicine to help reduce inflammation and is prescribed for bronchitis and asthma.

Forskolin: The active constituent forskolin was first isolated in the 1970s. It has important therapeutic benefits, which include lowering high blood pressure, relaxing smooth muscle, increasing the release of hormones from the thyroid gland, stimulating digestive secretions, and reducing pressure within the eye.

Whole herb: Research into coleus has focused on the action of forskolin in isolation, and the herb as a whole has not been researched.

Traditional uses: Coleus is a traditional herb in India for a wide range of digestive problems. It is given to relieve gas, bloating, and abdominal discomfort.

Circulatory remedy: An important heart and circulatory tonic, coleus is used to treat congestive heart failure and poor coronary blood flow. It also improves circulation of blood to the brain.

Glaucoma: Coleus is used topically in treatments to relieve glaucoma (excess pressure within the eye, which, if untreated, can result in loss of vision).

Weight loss: Recently, coleus has been marketed as a weight-loss aid. It is argued that because coleus stimulates cellular metabolism, it will help to promote weight loss. There is no evidence to support this, though it may be of use if weight gain is due to poor thyroid function.