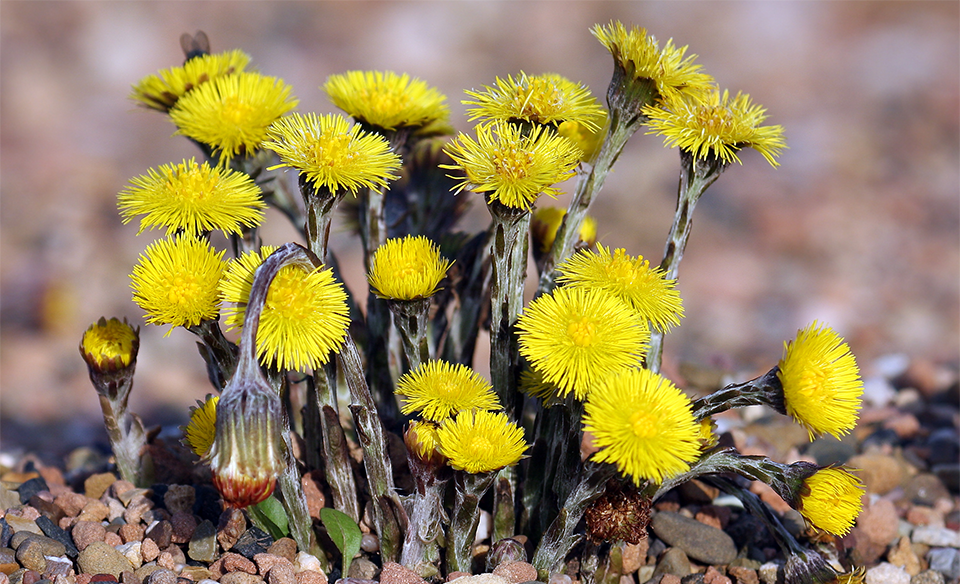 Indigenous to Europe and northern Asia, and naturalized in North America, coltsfoot is a common plant often found along roadsides and on verges and in open areas. The flowers are gathered in late winter, the leaves in summer.

Coltsfoot contains flavonoids, about 8% mucilage (polysaccharides), 10% tannins, pyrrolizidine alkaloids, vitamin C, and zinc. The pyrrolizidine alkaloids may have a toxic effect on the liver, but are largely destroyed when the parts are boiled to make a decoction. The polysaccharides are anti-inflammatory and immunostimulant. The flavonoids are anti-inflammatory and antispasmodic.

For at least 2,500 years, coltsfoot has been taken as a cough remedy and smoked as a means to ease breathing. Dioscorides, a Greek physician of the 1st century CE, recommended it for dry coughs, and “for those who are unable to breathe except standing upright.”

An effective demulcent and expectorant herb, coltsfoot is one of the most popular European remedies for treating chest problems. In Europe, the leaves are preferred to the flowers (which contain higher amounts of pyrrolizidine alkaloids), but in China the flowers are preferred. Both parts of the plant are taken as a decoction for chest conditions.

When used as a syrup or a medicinal cigarette, coltsfoot relieves asthma. This herb is used as a specific treatment for spasmodic coughs. It is particularly effective when used in combination with licorice (Glycyrrhiza glabra), thyme (Thymus vulgaris), and wild cherry (Prunus serotina).

Extracts of the whole plant have been shown to increase immune resistance. In a Chinese trial involving 36 patients suffering from bronchial asthma, 75% showed some improvement after treatment, but the anti-asthmatic effect was short-lived.

Do not use coltsfoot flowers. Do not take the leaves for more than 3–4 weeks at a time. Do not take coltsfoot during pregnancy or while breastfeeding. The herb is not suitable for children under 6. Coltsfoot is subject to legal restrictions in some countries.