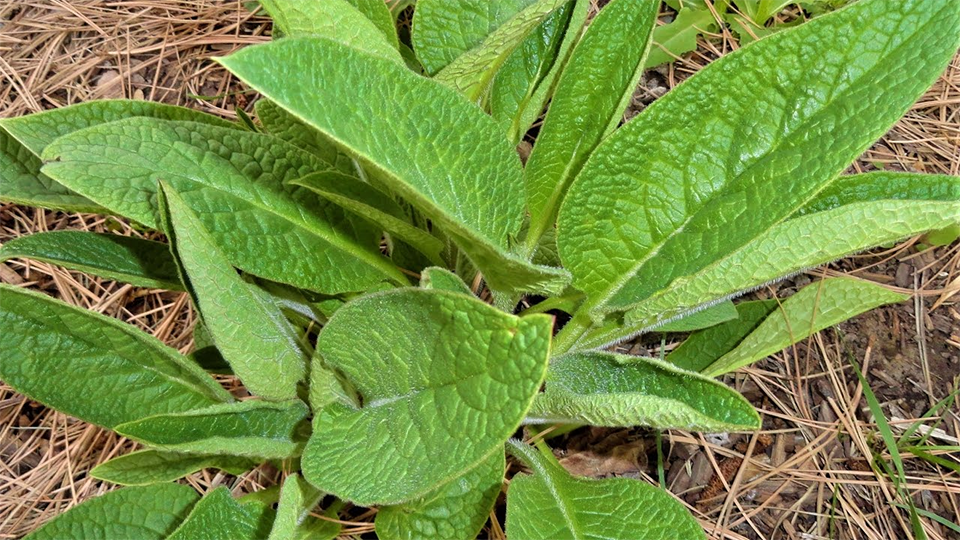 Comfrey’s names testify to its traditional use in mending broken bones. “Comfrey” is a corruption of con firma, meaning the bone is “made firm,” Symphytum is derived from the Greek for “to unite,” and knitbone speaks for itself. Comfrey is also a wound herb. K’Eogh in his Irish Herbal (1735) wrote that it “heals all inward wounds and ruptures.” Today, it is still highly regarded for its healing properties.

An indigenous European plant, comfrey grows in all temperate regions of the world, including western Asia, North America, and Australia. It thrives in moist, marshy places. It can be grown from seed in spring or by root division in autumn, and the leaves and flowering tops are harvested in summer. The root is unearthed in autumn.

Active constituents: Allantoin is a cell-proliferant that stimulates the repair of damaged tissue. The herb’s anti-inflammatory activity is partly due to the presence of rosmarinic acid and phenolic acids.

Pyrrolizidine alkaloids: Research shows that, as isolated substances, certain pyrrolizidine alkaloids can be highly toxic to the liver. It is still unclear whether they are toxic in the context of the whole plant, as they are only present in minute amounts, often being completely absent from samples of dried aerial parts. The highest concentration is in the root, which should not be used internally. Skin applications, as well as the aerial parts of the plant, are considered safe.

Clinical research: In Germany and elsewhere in Europe, comfrey is widely used for sprains, bruises, and sports injuries. Research, mostly in Germany, endorses the traditional knowledge of comfrey’s wound healing ability. In a 2007 study, physicians rated the efficacy of a comfrey leaf cream in healing abrasions. The doctors rated its effectiveness as good or very good in 93% of cases, and complete healing took 4 days with comfrey and 7 days with placebo. Other studies indicate comfrey’s value in promoting tissue repair and as an anti-inflammatory in conditions such as sprained ankle, osteoarthritis, and lower back pain.

Injuries: Comfrey’s ability to promote the healing of bruises, sprains, fractures, and broken bones has been known for thousands of years. It encourages ligaments and bones to knit together firmly. A comfrey compress applied immediately to a sprained ankle can significantly reduce the severity of the injury. The combination of tannins and mucilage helps to soothe bruises and grazes.

Other uses: Comfrey preparations have many other uses and can be applied to heal problems such as insect bites, scars, skin inflammation, acne, and mastitis.