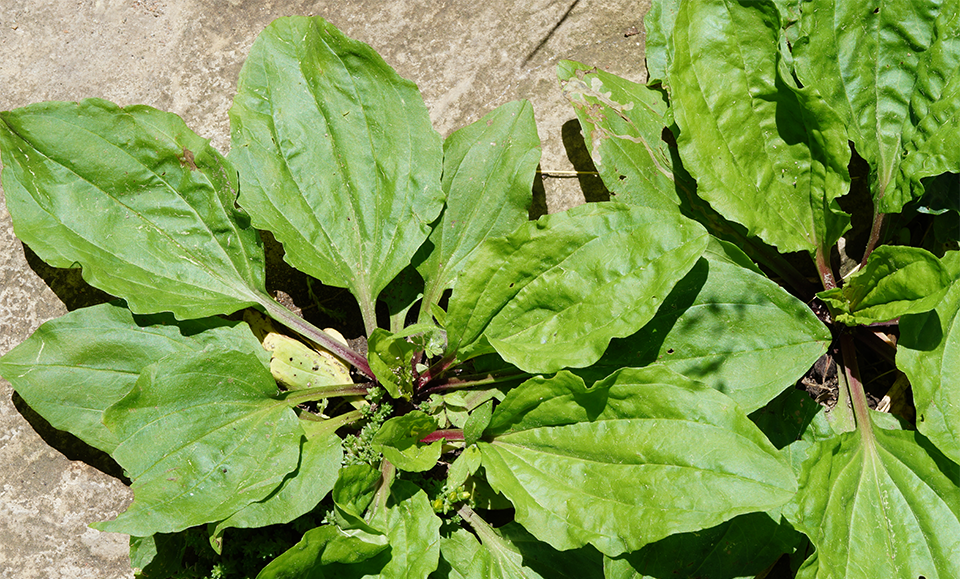 Perennial plant growing to 10 in (25 cm). Has a basal rosette of broad, deeply veined leaves and dense clusters of tiny green flowers on spikes.

Common plantain is native to Europe and temperate regions of Asia. Rarely cultivated, it is normally picked from the wild. The leaves are gathered throughout the summer.

In Gaelic, this herb is known as “the healing plant” because it was used in Ireland to treat wounds and bruises. It is a plant that has accompanied European colonization around the world—some Native Americans called it Englishman’s foot,” because it seemed to spring up in the footsteps of white settlers.

Common plantain quickly staunches blood flow and encourages the repair of damaged tissue. It is possible to use it as a substitute for comfrey (Symphytum officinale) in treating bruises and broken bones. An ointment or lotion may be used to treat hemorrhoids, fistulae (abnormal passages in the skin), and ulcers. Taken internally, common plantain is diuretic, expectorant, and anti-mucus. It is commonly prescribed for conditions including gastritis, peptic ulcers, diarrhea, dysentery, irritable bowel syndrome, respiratory inflammation, loss of voice, and urinary tract bleeding.

Ribwort plantain (P. lanceolata) is used in the same way as common plantain. Che qian cao (P. asiatica) is used in Chinese medicine as a diuretic and to counter mucus.