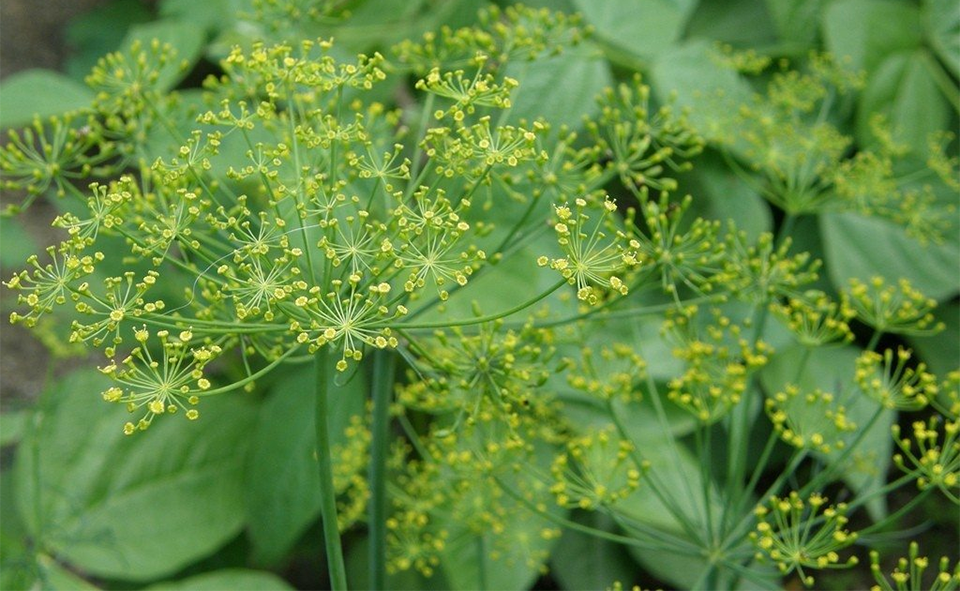 Aromatic annual that grows to a height of 30 in (75 cm). Has an erect hollow stem, feathery leaves, and numerous yellow flowers in umbels. Fruit is very lightweight and pungent.

Dill is native to southern Europe and central and southern Asia, growing wild in open areas. It is also widely cultivated, notably in England, Germany, and North America. The leaves are picked as a culinary herb. The seeds are harvested in late summer.

Dill seeds contain up to 5% volatile oil (about half of which is alpha-phellandrene), flavonoids, coumarins, xanthones, and triterpenes.

An ancient Egyptian remedy in the Ebers papyrus (c. 1500 BCE) recommends dill as one of the ingredients in a pain-killing mixture. The ancient Greeks are believed to have covered their eyes with fronds of the herb to induce sleep. Dill was commonly used as a charm against witchcraft in the Middle Ages, when it was burned to clear thunderclouds. Its name comes from the Norse dylla—meaning “to soothe.”

Dill has always been considered a remedy for the stomach, relieving gas and calming digestion. Dill’s essential oil relieves intestinal spasms and cramps and helps to settle colic, hence it is often used in gripe water mixtures. Chewing the seeds improves bad breath.

Dill makes a useful addition to cough, cold, and flu remedies, and is a mild diuretic. Like caraway (Carum carvi), it can be used with antispasmodics, such as cramp bark (Viburnum opulus), to relieve period pain. Dill increases milk production, and when taken regularly by nursing mothers, helps to prevent colic in their babies.

Take the essential oil internally only under professional supervision.