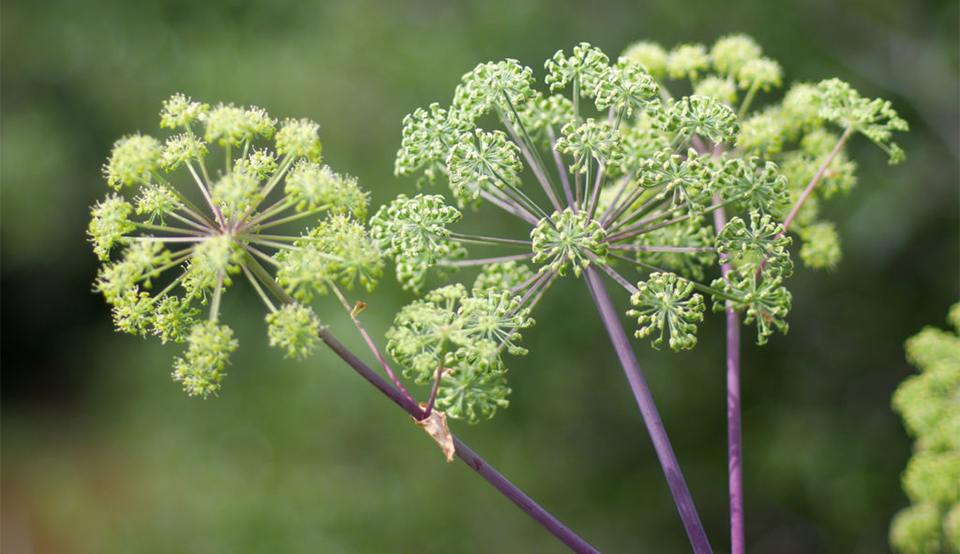 In China, dong quai is the main tonic herb for conditions suffered by women. It is taken on a daily basis by millions of women as an invigorating tonic, helping to regulate menstruation and tonify the blood. It also improves the circulation. Dong quai has a sweet, pungent aroma that is very distinctive, and in China it is often used in cooking, which is the best way to take it as a blood tonic.

Dong quai is native to China and Japan, where it is now cultivated. The best rhizomes are in Gansu province in China. Seed is sown in spring and the rhizomes are lifted in autumn.

American angelica (A. atropurpurea) has similar properties, though it is less aromatic. European angelica (A. archangelica) is a warming tonic herb for digestion and circulation, but does not have the same tonic action as dong quai.

Gynecology: Research in China from the 1970s has shown that the herb helps to regulate uterine contractions, which may explain its benefit for period pain.

Circulation: The root can help to normalize heart function and has been shown to thin the blood. It may therefore interact with anticoagulant medicines.

Blood tonic: Famous in China as a tonic, dong quai is taken for “deficient blood” conditions, anemia, and for the symptoms of anemia due to blood loss—a pale complexion, palpitations, and lowered vitality.

Women’s health: Dong quai regulates the menstrual cycle, relieves period pain and cramps, and is an ideal tonic for women with heavy menstruation who risk becoming anemic. However, as it stimulates menstrual bleeding, other tonic herbs such as nettle (Urtica dioica) are best taken during menstruation if the flow is heavy. It is also a uterine tonic, and helps infertility.

Circulation: Dong quai is a “warming” herb, improving the circulation to the abdomen and to the hands and feet. It strengthens the digestion and is also useful in the treatment of abscesses and boils.