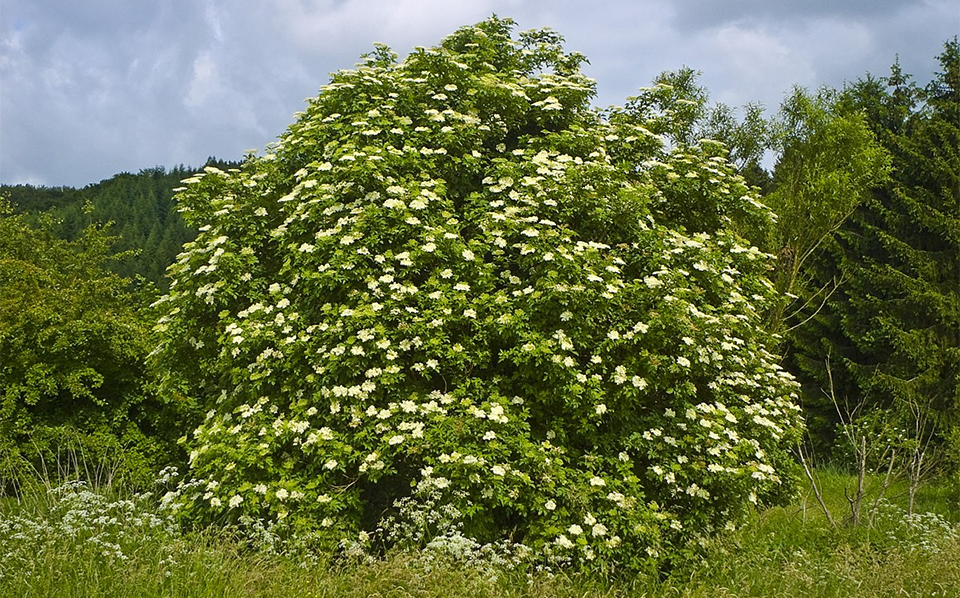 Elder has more folklore attached to it than almost any other European plant, except perhaps mandrake (Mandragora officinarum). Chopping elder branches was considered dangerous in rural England as it was believed that the tree was inhabited by the Elder Mother, and to avoid her wrath, woodcutters would recite a placatory rhyme. Elder is a valuable remedy for flu, colds, and chest conditions.

Native to Europe, elder thrives in woods, hedges, and in open areas. It is now found in most temperate regions, and is often cultivated. Elder is propagated from cuttings in spring. The flowering tops are harvested in late spring and the berries are picked in early autumn.

Elder berries: Israeli research from 1995 found 90% of people that were given elderberry extract recovered in 2–3 days, while 90% of those taking the placebo took up to 6 days. Further clinical trials have supported these findings—a 2014 review concluded there was “good scientific evidence” that elderberry extract was an effective treatment for influenza. Although the safety profile of elderberry has not been established, evidence indicates it is a safe influenza remedy for adults and children.

Coughs & colds: The berries have an established antiviral activity, helping prevent and speed recovery from upper respiratory infections, such as colds and flu. Following traditional usage, the flowers are taken to stimulate sweating and relieve fever by cooling the body. An elderflower infusion makes a soothing remedy when suffering from cold and flu.

Congestion & allergies: The flowering tops tone the mucous linings of the nose and throat (increasing their resistance to infection) and are prescribed for chronic congestion, ear infections, and allergies. Infusions with other herbs can reduce severity of hay fever attacks if taken some months before the season.

Arthritis: By encouraging sweating and urine production, elder flowering tops aid removal of waste products and are of value in arthritic conditions.

Other uses: Flowers and berries are mildly laxative and appear to help lower blood pressure. The flowers are thought to help control diabetes. The berries appear to enhance immune function.