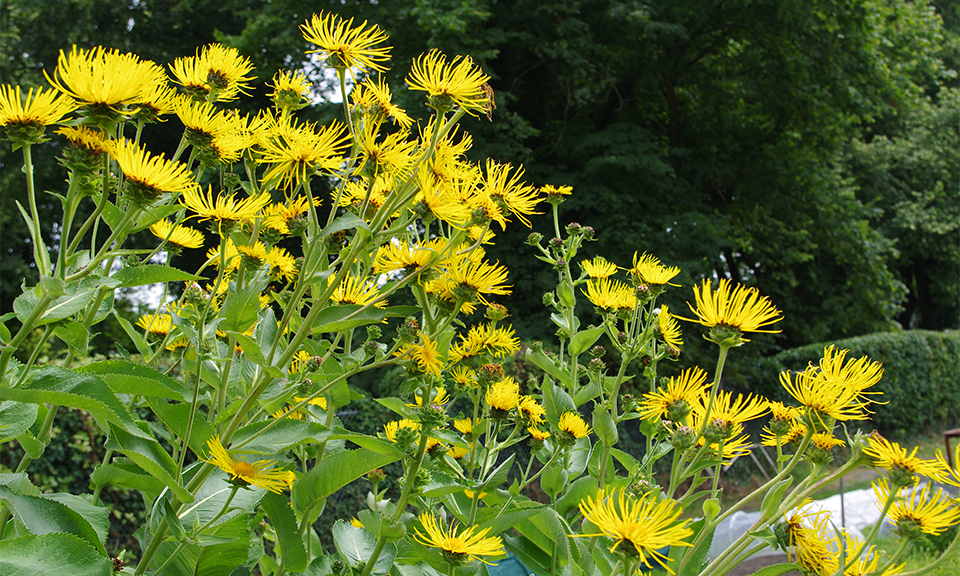 Prized by the Romans as a medicine and as a food, this herb derives its botanical name from Helen of Troy, who, according to legend, was holding elecampane in her hand when she set off with Paris to live with him in Troy. The root of the plant has long been seen as a gently warming and tonic herb, and is particularly useful for chronic bronchitis and other chest problems.

Native to southeastern Europe and western Asia, elecampane now grows in many temperate regions, including parts of the U.S. It is also cultivated. Propagated from seed in spring or by root division, it prefers moist, well-drained ground. The root is unearthed in autumn, cut up, and then dried at a high temperature.

Inulin: Inulin was first isolated from elecampane in 1804 and took its name from the herb. It has mucilaginous qualities that help soothe the bronchial linings.

Antimicrobial: Alantolactone has been shown to have significant activity against the tuberculosis mycobacterium. Researchers in Ireland found that the root had potent effect against MRSA, an antibiotic-resistant “superbug.”

Whole herb: As a whole, the root has a stimulant, expectorant effect, encouraging the coughing up of mucus from the lungs. The volatile oil is known to be partly responsible for this and also for the herb’s antiseptic properties.

Chest infections: Elecampane has long been valued for its tonic, strengthening effect on the respiratory system and for its ability to resolve chest infections. Its warming effect on the lungs, combined with its ability to gently stimulate the clearing of mucus from the chest, makes it safe for young and old. It can be used in almost all chest conditions, and is very useful when the patient is debilitated.

Chronic chest complaints: Elecampane’s qualities have led to its specific use for chronic bronchitis and bronchial asthma. It is particularly useful because it both soothes the bronchial tube linings and is an expectorant. In addition, the herb is mildly bitter, helping recovery by improving digestion and the absorption of nutrients.

Digestive problems: Elecampane has been taken traditionally as a tonic herb for the digestion. It stimulates the appetite and relieves dyspepsia. It is a useful remedy for the treatment of worms.

Infection: In the past, elecampane was used in the treatment of tuberculosis. It works well with other antiseptic herbs and is given for infections such as tonsillitis. Its restorative, tonic action complements its ability to counter infection.