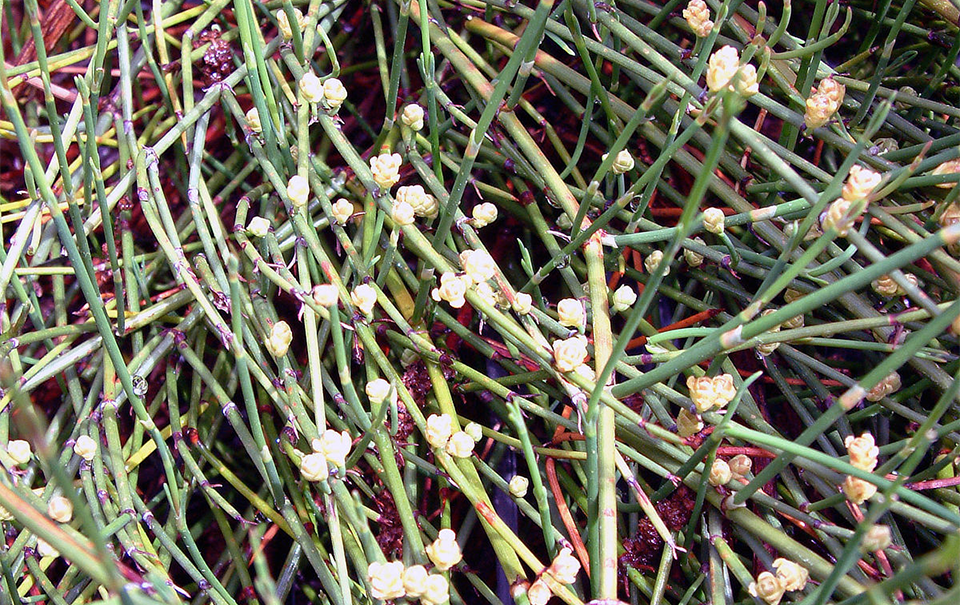 Ephedra is a strongly stimulant, acrid-tasting herb that has a central place in Chinese and other herbal traditions. According to legend, the bodyguards of Genghis Khan, threatened with beheading if they fell asleep on sentry duty, used to take a tea containing ephedra to stay alert. Today, ephedra is used in the West and in China for problems ranging from chills and fevers to asthma and hay fever.

Native to northern China and Inner Mongolia, ephedra often grows in desert areas. It is propagated from seed in autumn or by root division in autumn or spring and needs well-drained soil. The stems are gathered throughout the year and dried.

Active constituents: Most of the active constituents mimic the effect of adrenaline within the body, increasing alertness. Ephedrine, extracted originally from ephedra, was first synthesized in 1927 and is used as a decongestant and anti-asthmatic.

Whole herb: When used at the correct dosage, the whole herb has significant therapeutic effects—including dilating the bronchial airways—and a very low incidence of side effects.

Ephedra abuse: Ephedra has been banned in the U.S. due to frequent abuse of the herb, as an amphetamine-type “high” and, at excessive dosage, in weight-loss regimens. At therapeutic dosage, and with professional guidance, ephedra rarely gives rise to side effects.

Chinese herb: In China, ephedra is popular for chills and fevers, coughs and wheezing, and in combination with rehmannia (Rehmannia glutinosa) it is given to treat kidney yin deficiency.

Current Western uses: Ephedra is used principally in current Western herbal medicine as a treatment for asthma and hay fever, and for the acute onset of colds and flu. It also helps to raise blood pressure, cool fevers, and to alleviate rheumatism.