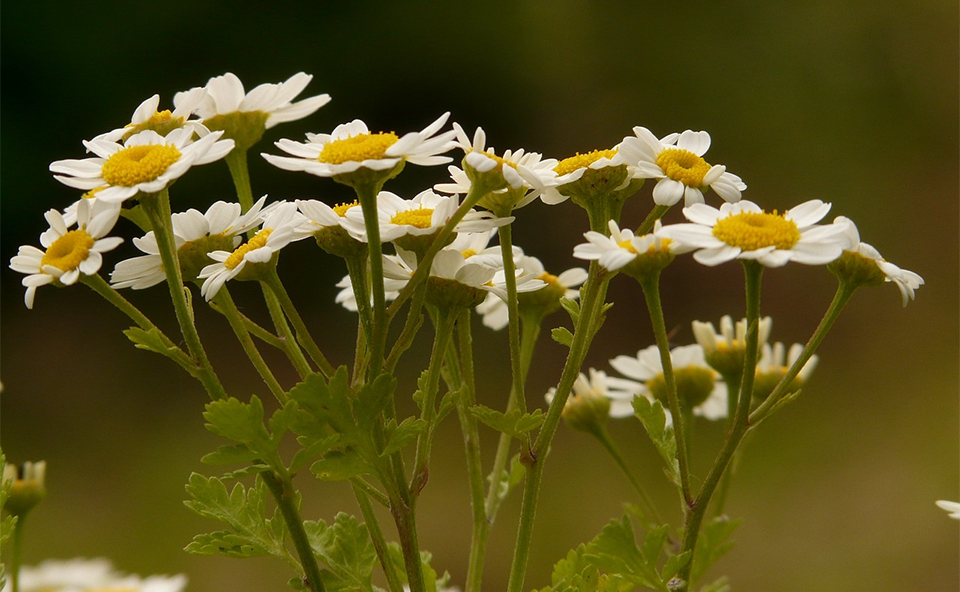 Feverfew’s main traditional use was as a woman’s herb. Nicholas Culpeper in The English Physitian (1652) sings its praises as “a general strengthener of [the] womb … it cleanseth the womb, expelleth the after-birth and doth the woman all the good she can desire of an herb.” Feverfew is now used principally as a treatment for migraine, but has also long been thought of as an herb for arthritis and rheumatism.

Originally from southeastern Europe, feverfew is now common throughout Europe, Australia, and North America. It can be propagated from seed or cuttings, and prefers well-drained soil and sun. The leaves are picked as required and the aerial parts as a whole are harvested in summer when the plant is in flower.

Feverfew is a close relative of tansy (Tanacetum vulgare), and the chrysanthemum and chamomile species.

Migraine: When, in 1973, the wife of a Welsh doctor ended her 50-year history of migraine with a course of feverfew, a detailed scientific investigation got underway. In clinical trials in Britain during the 1980s the herb was shown to be an effective remedy for migraine. Further clinical trials across Europe, including one in 2006 that combined feverfew and willow bark (Salix alba), attest to feverfew’s ability to treat migraine. The trials indicate feverfew may need to be taken long term (for 6 months or more) for full effect.

Fevers: As its name implies, feverfew may be used to lower temperature and cool the body.

Gynecological uses: The herb has been used since Roman times to induce menstruation. It is also given in childbirth to aid expulsion of the placenta.

Migraine & headaches: In small quantities, feverfew is now used as a preventative for migraine. It has to be taken regularly, and at the first signs of an attack. It is useful for migraine associated with menstruation, and for headaches.

Arthritis remedy: The herb can help arthritic and rheumatic pain, especially with other herbs.