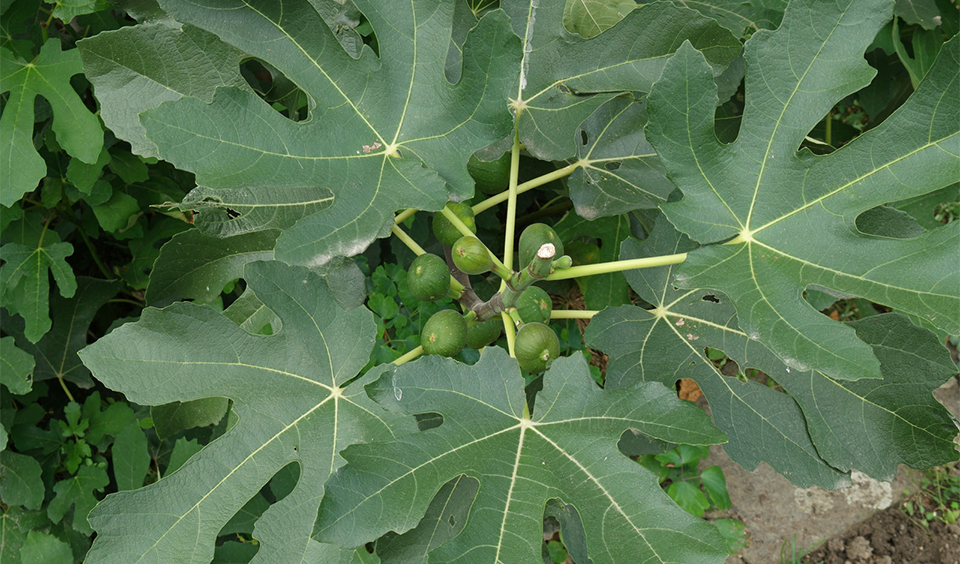 Native to western Asia, fig now grows wild and is cultivated in many temperate and subtropical regions. Fruit is harvested in summer.

The fig leaf was used by Adam and Eve to hide their nakedness in the Garden of Eden. There are many other references to the plant in the Old Testament, mainly to the sweetness of the fruit and to its use as a medicine. Spartan athletes in Ancient Greece were said to eat figs in order to improve their performance.

The fruit sugars within the fig (especially the dried fruit) have a pronounced but gentle laxative effect; syrup of figs is still a remedy for mild constipation. The fruit’s emollient pulp helps relieve pain and inflammation, and it has been used to treat tumors, swellings, and gum abscesses—the fruit often being roasted before application.

Figs are also mildly expectorant and, when used with herbs such as elecampane (Inula helenium), are helpful in treating dry and irritable coughs and bronchitis. The milky latex from leaves and stems is reputed to be analgesic, and has long been used to treat warts, insect bites, and stings.

Research published in 1999 showed that an extract of leaves of F. racemosa, a native of northern India, had a marked protective activity on the liver in rats. The juice and powdered bark of the Central American F. cotinifolia are applied to wounds and bruises.

F. indica is used in Ayurvedic medicine as a tonic, diuretic, and treatment for gonorrhea. F. lacor is used in Chinese herbal medicine to induce sweating, while F. retusa, which is native to China, Indonesia, and Australia, is used in the Chinese tradition to treat toothache and tooth decay. See also banyan tree (F. benghalensis) and peepal (F. religiosa).

The latex is toxic and should not be used internally. Applied to the skin, it may cause an allergic reaction to sunlight.