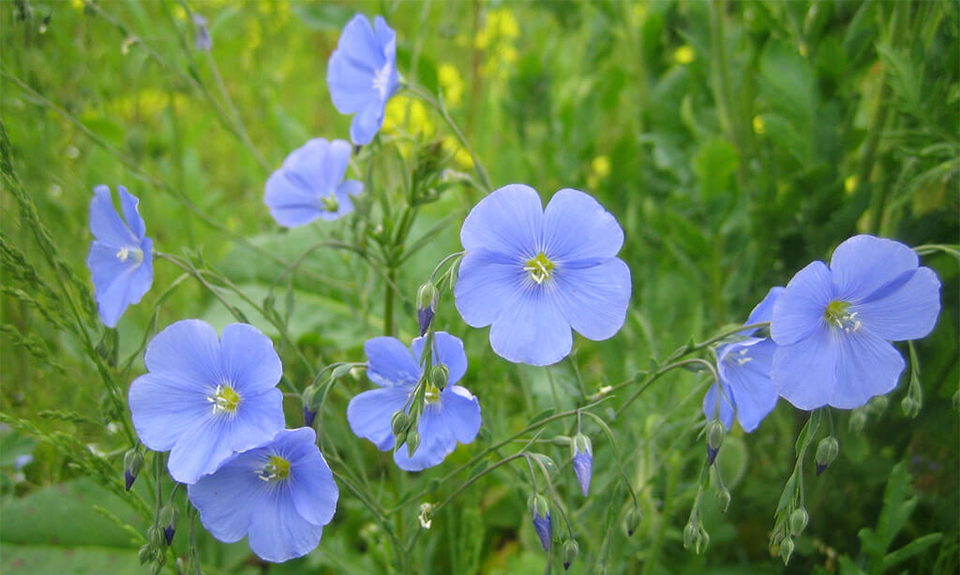 Flaxseed or linseed has been cultivated in the Middle East for at least 7,000 years, and its seed and fiber have been put to innumerable uses—both medicinal and industrial—throughout history. Flaxseed has been shown to have very high levels of polyunsaturated essential fatty acids, making it valuable in maintaining a healthy heart and circulation, and in preventing chronic inflammatory diseases.

Originally native to temperate zones in Europe and Asia, flaxseed is now widely cultivated in temperate regions, including Canada and the U.S., Argentina, and northern Europe. It is grown from seed in spring and harvested when the seed is ripe in late summer or early autumn.

Purging flax (L. catharticum), native to western Europe, is a purgative, but no longer used.

Omega-3 oils: Flaxseed is unusual in that it has very high levels of alpha-linolenic acid, an omega-3 polyunsaturated fatty acid, similar to those most commonly found in fish oils. Research indicates that omega-3 oils have significant anti-inflammatory activity. They also help to protect the heart and circulation, and to reduce heart irregularities. The seed, rather than the oil, helps to lower cholesterol levels.

Cancer-fighting: Ground flaxseed appears to be specifically useful against endometrial, breast, and prostate cancer: it is rich in omega-3 oils, which are deficient in most Western diets; in lignans, which are phytoestrogenic and reduce the impact of estradiol (a potentially harmful type of estrogen); and in mucilage and fiber, which prevent reabsorption of unwanted estrogens from the intestines. Flaxseed added to the diet lowers PSA levels (used to measure prostate cancer risk) and thus is thought to protect against prostate cancer.

Laxative: Flaxseed has mostly been used as a bulk laxative, especially valuable in chronic constipation. The seeds soak up fluid in the gut, helping to make the stool softer and encouraging easier bowel movements. They should be taken with about 5 times their volume of water. With their significant mucilage content, the seeds are also soothing and anti-inflammatory, reducing irritation and inflammation in the gut in such conditions as colitis, irritable bowel, and hemorrhoids.

Respiratory & urinary disorders: The seeds, which need to be split or ground up before being swallowed, soothe the chest and, to a lesser extent, the urinary tract. They have proved helpful in chronic or paroxysmal coughs, bronchitis, and emphysema, and in urinary troubles such as chronic cystitis.

External uses: A poultice of the crushed seeds or of flaxseed flour is applied to painful or tender boils and carbuncles, softening the skin and drawing out the purulent material. A Portuguese recipe recommends combining flaxseed oil with red wine as an effective topical remedy for wounds.

Menopause: Adding flaxseed to the diet can support estrogen balance at menopause and reduce associated symptoms. Flax and other seeds can be made into a “menopause cake.”