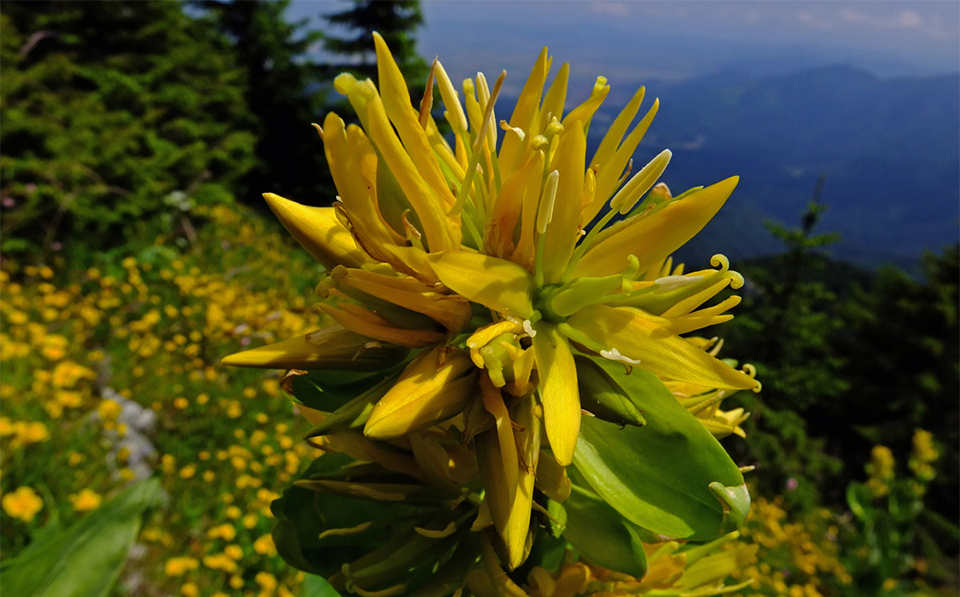 Gentian is a powerful bitter, and the herb is an essential ingredient of traditional aperitifs and bitters such as Angostura bitters. The customary aperitif about half an hour before a meal is more than a social nicety—the bitter constituents stimulate gastric juices and prime the stomach, enabling it to cope effectively with a heavy meal. Medicinally, gentian strengthens a weak or underactive digestive system.

This largest member of the diverse gentian family is native to the Alps and other mountainous regions of central and southern Europe from Spain to the Balkans, flourishing at altitudes of 2,300–7,900 ft (700–2,400 m). The large root crowns can be split or the plant grown from seed. Due to over harvesting from the wild, this is now a threatened species, so buy only cultivated root. It needs a loamy soil and a sheltered site. The root is dug up in early autumn and dried.

Many gentian species are bitter-tasting plants and a number are used in herbal medicine as a result, for example Japanese gentian (G. scabra) and the Chinese qin jiao (G. macrophylla).

Origin of the name: Gentius, king of Illyria in the 2nd century BCE, reputedly discovered the virtues of the plant. The name gentian attests to its use in classical times.

Action of bitter principles: There are 4 main taste receptors on the tongue: sweet, sour, salty, and bitter. It has been shown that the bitter principles in gentian stimulate the bitter taste receptors on the tongue, causing an increase in the production of saliva and gastric secretions. This in turn stimulates the appetite and improves the action of the digestive system in general.

Digestive stimulant: By stimulating the action of the stomach, many symptoms associated with weak digestion, such as gas, indigestion, and poor appetite, are relieved. Stomach and other secretions are improved, which in turn helps increase the absorption of nutrients. The herb also acts as a stimulant on the gallbladder and liver, encouraging them to function more efficiently. Gentian is therefore useful in almost any condition where the digestive system needs to be toned up. It is often taken as a digestive tonic in old age.

Nutrient absorption: By improving digestive function, gentian increases the absorption of nutrients across the gut wall. It aids the absorption of a wide range of nutrients, including iron and vitamin B12, and is therefore useful for iron deficiency anemia (usually resulting from blood loss). It is often added to prescriptions for women with heavy menstrual bleeding.