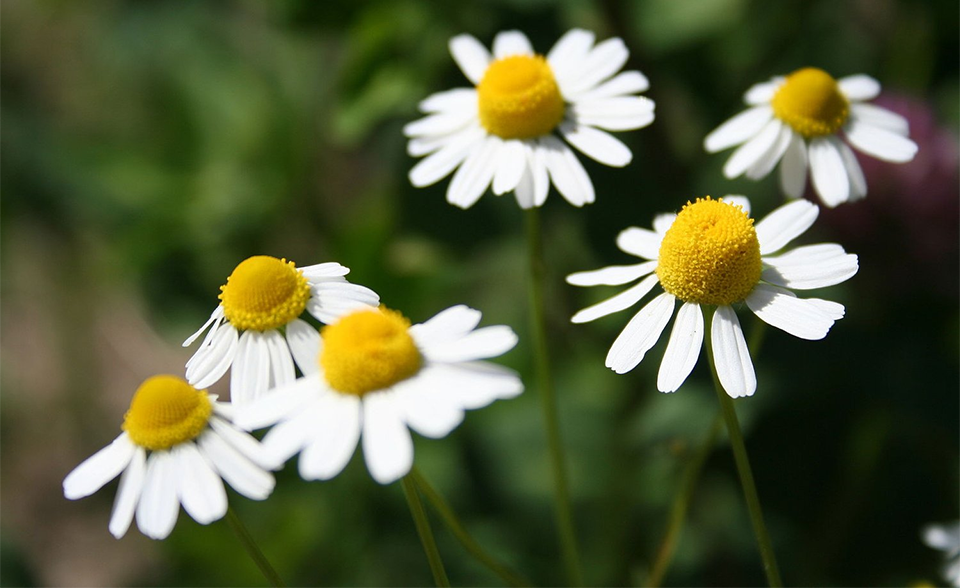 German chamomile’s aromatic, slightly bitter taste, reminiscent of apples, is familiar to herbal tea drinkers. The herb’s varied medicinal uses, however, are not as well known. It is an excellent herb for many digestive disorders and for nervous tension and irritability. Externally, it is used for sore skin and eczema. Roman chamomile (Chamaemelum nobile) is a close relation, used in a similar way.

German chamomile grows in much of Europe and other temperate regions. The seeds are sown in spring or autumn and the flower heads are picked in full bloom, in summer.

Trials in Germany: A cream made from German chamomile was tested in 1987 for its ability to heal wounds. The results produced were very positive. In 1993, another trial using German chamomile and four other herbs showed them to be most effective at easing infantile colic.

Digestive problems: German chamomile has been taken for digestive problems since at least the 1st century CE. Gentle and efficacious, it is very suitable for children. The herb is valuable for pain, indigestion, acidity, gastritis, gas, bloating, and colic. It is also used for hiatal hernia, peptic ulcer, Crohn’s disease, and irritable bowel syndrome.

Irritation: The herb is useful for hay fever and asthma. On steam distillation, the pro azulenes produce chamazulene, which is markedly anti-allergenic. Externally, it can be applied to sore, itchy skin, sore nipples, and eczema. It also relieves eyestrain. A poultice can be applied to sore breasts.