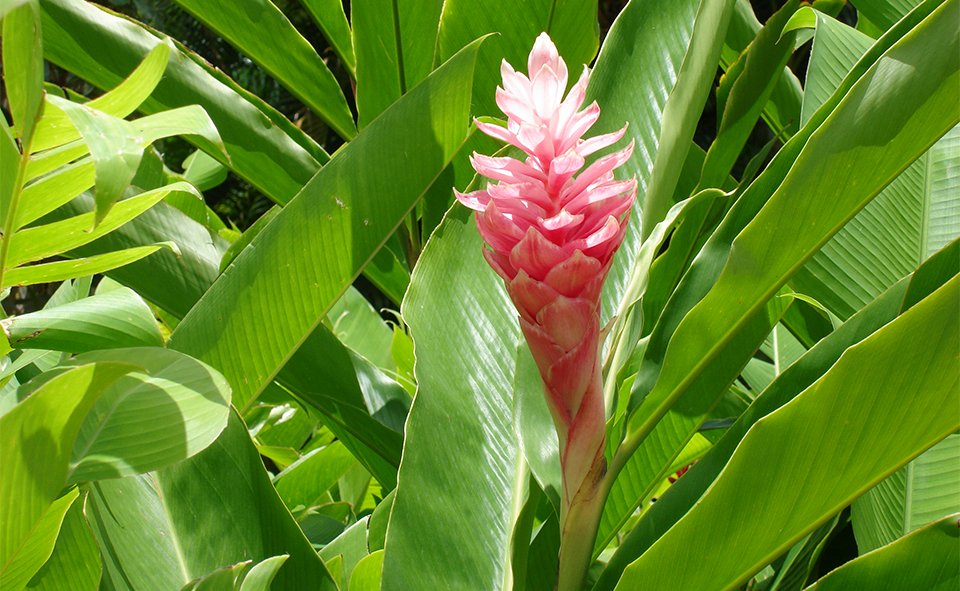 Familiar as a spice and flavoring, ginger is also one of the world’s best medicines. It has been revered in Asia since the earliest times, and in medieval Europe it was thought to have derived from the Garden of Eden. Ginger’s warming and anti-inflammatory properties can bring relief to problems as varied as headache and migraine, joint pain, indigestion, motion sickness, and morning sickness. Fresh ginger has a pungent, slightly lemony taste.

Native to Asia, ginger is grown throughout the tropics. It is propagated by dividing the rootstock. Ginger flourishes in fertile soil and needs plenty of rain. The rhizome is unearthed when the plant is 10 months old. It is washed, soaked, and sometimes boiled and peeled.

Various Zingiber species are used medicinally, but no other has benefits equal to ginger. Turmeric (Curcuma longa) is a close relative.

Digestive health: Ginger speeds up the rate of gastric emptying and aids the absorption of nutrients from the digestive tract. By improving iron absorption, it helps to treat anemia. Clinical trials indicate that it can relieve nausea and vomiting.

Morning sickness: A 2013 Australian review of clinical trials using ginger to relieve pregnancy induced nausea and vomiting concluded that “The best available evidence suggests that ginger is a safe and effective treatment for PNV.”

Pain relief: Several small-scale research studies have found that ginger reduces muscle pain, for example, after exercise. This is because of a potent anti-inflammatory action. One study found that after 2 months of treatment, ginger was as effective in relieving menstrual cramps as mefenamic acid (an aspirin-type painkiller). A 2014 Iranian clinical trial compared the effects of ginger and sumatripan (a painkiller) in relieving migraine, and reported that the two treatments were similarly effective.

Digestive problems: Ginger is thought to be helpful for almost all digestive complaints. It is an excellent remedy for symptoms such as indigestion, nausea, gas, bloating, and cramps—whether taken as an infusion, juice, tincture, or powder, or with food. Its antiseptic activity makes it valuable in all gastrointestinal infections, including food poisoning.

Circulatory stimulant: Ginger stimulates circulation, and helps blood to flow to the surface, making it an important remedy for chilblains and poor circulation to the hands and feet. Juice squeezed from fresh ginger root can be applied to chilblains (and cold sores), bringing quick relief.

Respiratory conditions: Ginger has antiviral activity and is a first-rate remedy for coughs, colds, flu, and other respiratory problems. Despite its warming properties, ginger stimulates sweating and helps to cool and control fevers.