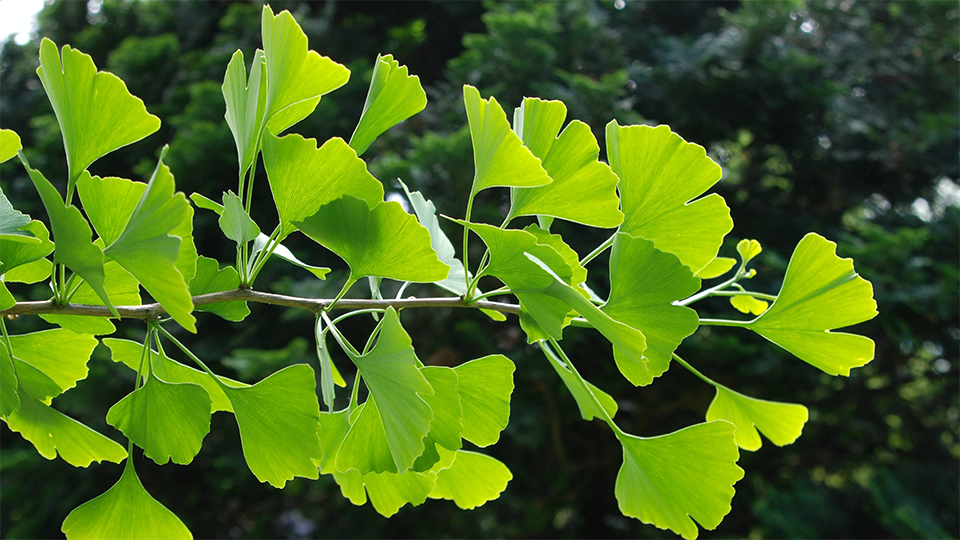 Ginkgo is thought to be the oldest tree on the planet, first growing about 190 million years ago. Though long used as a medicine in its native China, its therapeutic actions have only recently been researched. The leaves (and their extract) are used to treat poor circulation and to maintain a plentiful blood flow to the central nervous system. Ginkgo is also valuable for asthma and other allergic problems.

Native to China, ginkgo trees are grown in large-scale plantations in China, France, and in South Carolina in the U.S. They produce green to yellow fan-shaped leaves with radiating veins, and round fruits about 3 cm (1 in) across. Leaves and fruit are harvested in autumn.

Clinical trials: Extensive research since the 1960s has established the importance of ginkgo in improving poor cerebral circulation and aiding memory and concentration. Several clinical trials have found that gingko proved useful as a treatment for dementia, including Alzheimer’s disease, although some studies have found no positive benefit. Other research indicates possible use in conditions as varied as depression, glaucoma, and poor peripheral arterial blood flow.

Anti-inflammatory action: Ginkgo’s ability to reduce inflammation makes it valuable in conditions where nerve tissue is damaged by inflammation, for example multiple sclerosis.

Platelet activating factor: (PAF) Ginkgo inhibits PAF, a substance released by a range of blood cells that causes the blood to become stickier and more likely to produce clots.

Chinese herbal medicine: Ginkgo seeds are used to relieve wheezing and to lessen phlegm. They are also given to treat vaginal discharge, a weak bladder, and incontinence. The leaves are traditionally used for treating asthma.

Western herbal medicine: Western interest in ginkgo has concentrated on the remarkable ability of the leaves to improve the circulation, especially poor circulation to the brain, and the herb’s anti-allergenic and anti-inflammatory actions, which make it a particularly useful herbal remedy for the treatment of asthma.

Ginkgo is a bestselling herbal medicine in France and Germany, where it is taken daily by millions of people from middle age onward to maintain and improve cerebral circulation and the memory, and to reduce the possibility of a stroke. It is also a valuable medicine to take after a stroke, where it is thought to support nerve tissue and strengthen the circulation.