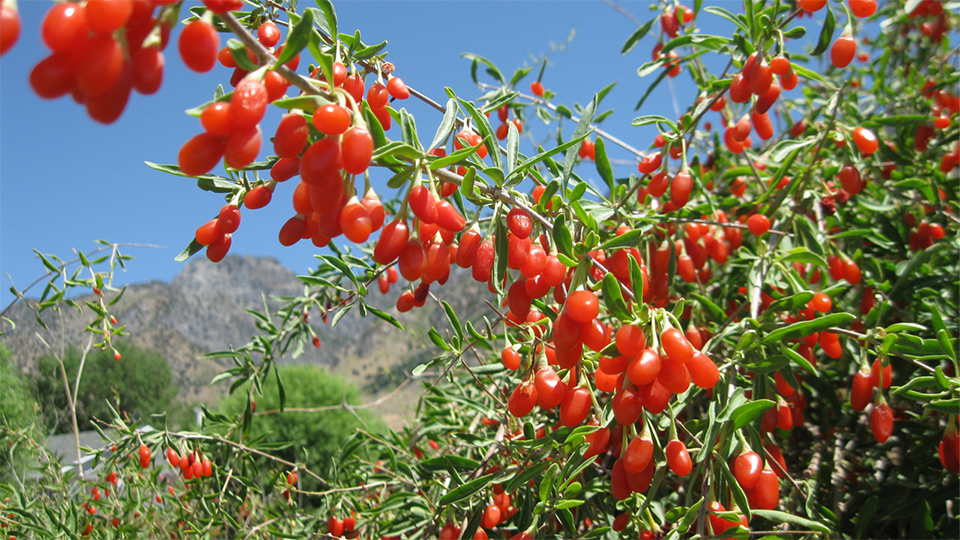 Goji berry is a major Chinese tonic herb, first mentioned in the Divine Husbandman’s Classic (Shen’nong Bencaojing) written in the 1st century CE. Traditionally it is believed to promote long life—a Chinese herbalist, said to have lived for 252 years, ascribed his longevity to tonic herbs, including goji berry. Today, both the berries and the root have a wide range of medicinal uses.

Goji berry grows throughout much of China and Tibet, and is cultivated extensively across central and northern China. It is grown from seed in autumn. The root can be unearthed at any time of the year, but is most commonly harvested in spring. The berries are picked in late summer or early autumn.

Immune modulation: Research that has been carried out over the past 30 years indicates goji berry supports immune function, in part countering the reduction of white blood cell production resulting from aging. It also appears to prevent infection by preventing bacteria and viruses from attaching to cell membranes, particularly in the liver. The polysaccharides have cancer-fighting activity.

Zeaxanthin: This compound, occurring in higher concentration in goji berry than any other food, is taken as a supplement to support eyesight and the health of the retina. It is thought to protect against age related macular degeneration.

Tonic and neuroprotective: Several clinical trials in China have found that goji berry juice promotes general well-being, reducing signs of fatigue, weakness, depression, and stress. In early-stage research, goji berry has shown promise as a neuroprotective agent, and seems to act within the brain to prevent some aspects of the degenerative processes associated with Alzheimer’s disease.

Circulation: In China, goji berry is taken as a blood tonic and to improve the circulation. It is also taken in order to help lower blood pressure and treat a range of symptoms that include dizziness and tinnitus.

Slowing aging: The traditional use of goji berry as a tonic of key importance in the elderly is gradually being endorsed by research. Combined effects that protect immune, liver, cardio-vascular, and brain function from deterioration suggest that goji berry has a place in the diet of anyone seeking to keep healthy in their later years. A small handful of berries taken on a daily basis (eaten raw or as part of a larger dish) makes a useful contribution to long term good health.