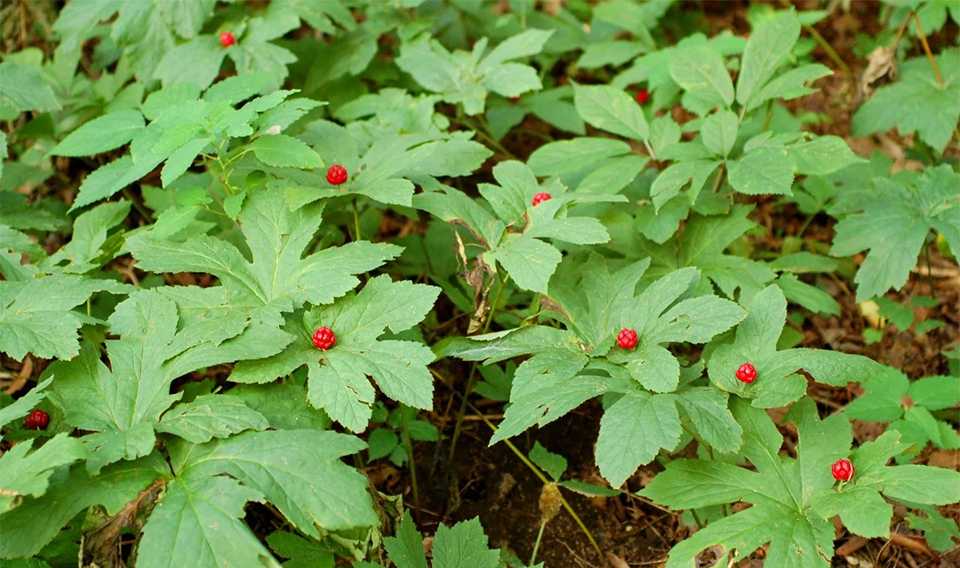 Goldenseal is a North American remedy, prized during the 19th century as a cure-all. The Cherokee and other Native Americans used it, mixed with bear fat, as an insect repellent, and they also made it into a lotion for wounds, ulcers, and sore, inflamed eyes. It was given internally for stomach and liver problems. Today it is employed as an astringent, antibacterial remedy for the mucous membranes of the body.

Goldenseal grows wild in moist mountainous woodland areas of North America and prefers soil that is well covered with dead leaves. Due to excessive harvesting in the wild, instances of goldenseal in its natural habitat have become very rare. In 1997 it was listed as an endangered species, and so only cultivated produce should be used. Goldenseal is propagated by root division. Rhizomes from 3-year-old plants are dug up in the autumn and dried in the open air on cloth.

Alkaloids: For an herb with such a high medicinal reputation, there has been very little research into its pharmacology, but it is known that goldenseal’s medicinal actions are due largely to the isoquinoline alkaloids.

Hydrastine: Research in Canada in the late 1960s showed that hydrastine constricts the blood vessels and stimulates the autonomic nervous system.

Antibacterial: Although this herb’s mode of action and degree of effectiveness is not fully known, it has been found that the herb’s constituents collectively have a stronger antibacterial activity than berberine alone.

Berberine: Berberine is bitter, antibacterial, and amebicidal. Recent research has established that it can be used to lower harmful blood-fat levels and stabilize blood glucose levels.

Canadine: Research shows that this alkaloid stimulates the muscles of the uterus.

Mucous membranes: Most authorities agree that goldenseal is a potent remedy for disorders affecting mucous membranes of the body, notably of the eye, ear, nose, and throat, the stomach and intestines, and the vagina.

Countering infection: As a dilute infusion, goldenseal can be used as an eyewash, as a mouthwash for infected gums, and as an extremely effective wash or douche for vaginal yeast and vaginal infections generally. The infusion is also valued as a remedy for psoriasis.

Digestive problems: Taken internally, goldenseal increases digestive secretions, astringes the mucous membranes that line the gut, and checks inflammation. It should not be taken for extended periods of time as it reduces the gut’s capacity to absorb certain nutrients, notably B vitamins.

Gynecological uses: Goldenseal helps to reduce heavy menstrual bleeding and is used by herbal practitioners and midwives to help stop bleeding following childbirth (postpartum hemorrhage). Goldenseal stimulates the uterus and should not, therefore, be taken during pregnancy.