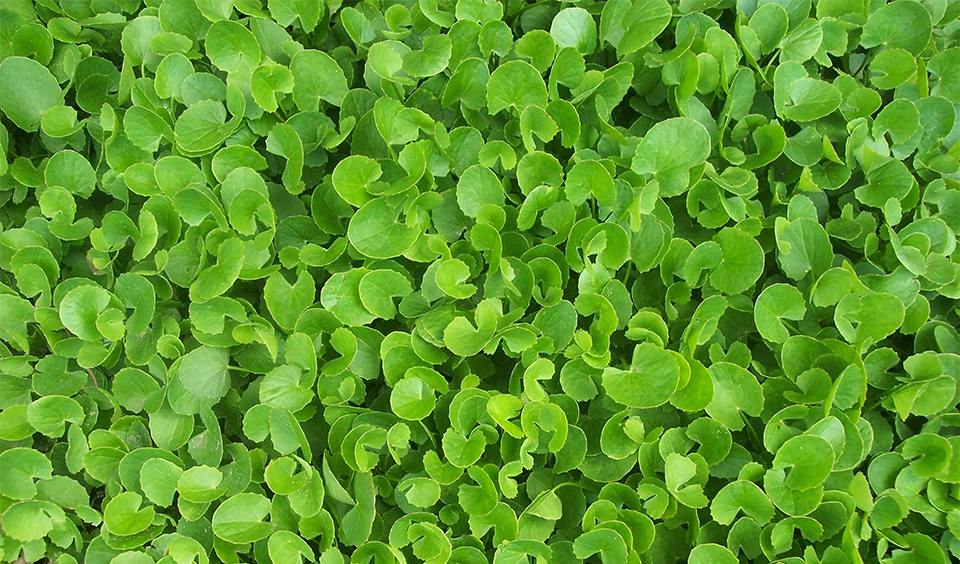 Gotu kola is an ancient Ayurvedic remedy that is now used extensively in the West. It is a useful tonic and cleansing herb for skin problems and digestive disorders. In India, it is used to treat a variety of conditions, including leprosy, but it is valued chiefly as a revitalizing herb that strengthens nervous function and memory. It has a bittersweet, acrid taste, and in India it is sometimes used in salads and as a vegetable.

Gotu kola is native to India and the southern U.S. It also grows in tropical and subtropical parts of Australia, southern Africa, and South America. It prefers marshy areas and riverbanks. Though usually gathered wild, gotu kola can be cultivated from seed in spring. The aerial parts are harvested throughout the year.

Marsh pennywort (Hydrocotyle vulgaris) is a related European species, but, unlike gotu kola, has no known therapeutic uses.

Wound healing: Gotu kola has an established ability to promote wound healing and tissue repair, making it useful as a cosmetic agent, in skin disorders such as psoriasis, and in arthritis. Asiaticoside, in particular, has been shown to speed up collagen formation and the laying down of new blood vessels.

This healing effect extends to the blood vessels, so that gotu kola extracts aid venous repair, notably in chronic venous insufficiency, a condition that includes symptoms such as leg swelling and varicose veins. Recent U.S. research has investigated the effectiveness of high-strength extracts to help in diabetic neuropathy (nerve pain due to poor circulation) with signs of positive benefit.

Wound healing: Gotu kola’s main traditional use lies in treating wounds and skin problems. In Ayurveda, it is used specifically to promote healing in skin ulcers and serious skin problems, as well as to prevent scarring. The herb may be applied directly to the skin, or taken internally, where it appears to promote tissue repair throughout the body. It supports peripheral circulation and can be taken to strengthen blood vessels, e.g. varicose veins. Many people swear by gotu kola’s ability to prevent and relieve arthritis and rheumatic problems.

Tonic: The herb has a longstanding reputation in India and southern Asia as a “rejuvenator,” aiding concentration and memory, particularly in the elderly. In Western herbal medicine, it is understood to be an adaptogen and can be taken long-term to help support healthy brain function, slow aging, and calm anxiety. It is also thought to have a tonic effect on digestion.