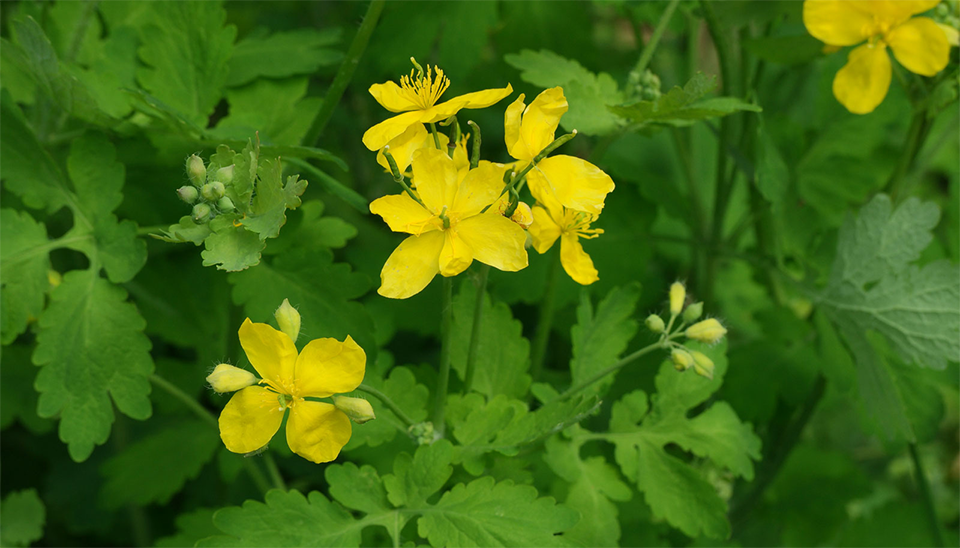 Thin-stemmed perennial herb growing to a height of 3 ft (90 cm). Has indented yellow-green leaflets and 4-petaled flowers, which appear in clusters in late spring.

Native to Europe, western Asia, and North Africa, greater celandine flourishes close to human habitation, preferring open areas, the banks of roadsides, and damp places. The aerial parts of the herb are collected in late spring or early summer.

Greater celandine contains isoquinoline alkaloids, including allocryptopine, berberine, chelidonine and sparteine. Several of these alkaloids are analgesic. Chelidonine is antispasmodic and also lowers blood pressure. Sparteine, by contrast, raises it.

In folk medicine, greater celandine has often been viewed as a cure-all. It has also been used for thousands of years to treat and clear the eyesight, especially cataracts. According to Pliny and Dioscorides (both writing in the 1st century CE), swallows used the latex that flows from cuts in the stems or leaves as a means to sharpen their eyesight. In 1598, Gerard recommended the herb for eye disorders “for it clenseth and consumeth awaie slimie things that cleave about the ball of the eie.”

Greater celandine acts as a mild sedative, relaxing the muscles of the bronchial tubes, intestines, and other organs. In both Western and Chinese herbal traditions, it has been used to treat bronchitis, whooping cough, and asthma.

The herb’s antispasmodic effect extends to the gallbladder, where it helps to improve bile flow. This would partly account for its use in treating jaundice, gallstones, and gallbladder pain, as well as its longstanding reputation as a detoxifying herb. Greater celandine’s sedative action does not, however, extend to the uterus—it causes the muscles of this organ to contract.

The herb is applied externally to soothe and encourage the healing of skin conditions such as eczema. The yellow latex of greater celandine is applied to warts, ringworm, and malignant skin tumors, which are slowly broken down by the effect of its protein-dissolving enzymes.

Use only under professional supervision. Can cause liver damage in rare cases. It is subject to legal restrictions in some countries.