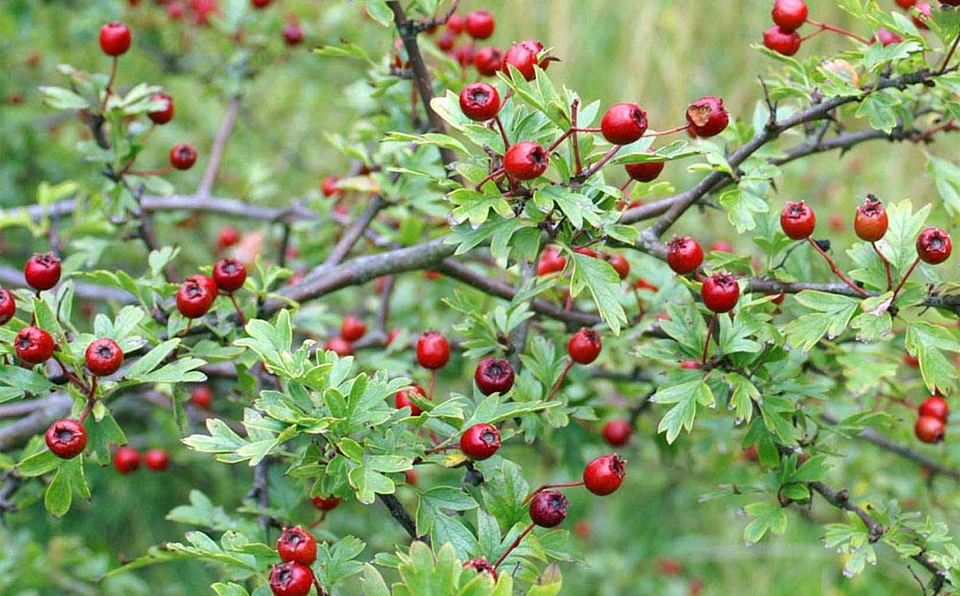 Hawthorn is an extremely valuable medicinal herb. It was known in the Middle Ages as a symbol of hope and taken for many ailments. Today it is used mainly for heart and circulatory disorders, in particular for angina. Western herbalists consider it literally to be a “food for the heart,” increasing blood flow to the heart muscles and restoring normal heartbeat. Recent research has confirmed the validity of these uses.

The hawthorn tree grows along roadsides, and in thickets and fields throughout the British Isles and in all temperate regions of the northern hemisphere. It can be propagated from seed, but it takes 18 months to germinate, so the trees are usually cultivated from cuttings. The flowering tops are harvested in late spring and the berries in late summer to early autumn.

Bioflavonoids: Hawthorn has been fairly well researched. Its main medicinal benefit is due to its high bioflavonoid and proanthocyanin content. These constituents relax and dilate the arteries, especially the coronary arteries. This increases the flow of blood to the heart muscles and reduces the symptoms of angina. Both the bioflavonoids and the proanthocyanins are also strongly antioxidant, helping to prevent or reduce degeneration of the blood vessels.

Historical uses: Hawthorn was traditionally used in Europe for kidney and bladder stones, and as a diuretic. The 16th- and 18th-century herbals of Gerard, Culpeper, and K’Eogh all list these uses. Its current use for circulatory and cardiac problems stems from an Irish physician who started using it successfully for such conditions toward the end of the 19th century.

Heart remedy: Hawthorn is used today to treat angina and coronary artery disease. It specifically improves heart function and is useful for mild congestive heart failure and irregular heartbeat. Like many herbs, hawthorn works in tune with the body’s own physiological processes and it takes time for change to occur.

Poor memory: Combined with ginkgo (Ginkgo biloba), hawthorn is used to enhance poor memory. It works by improving the circulation of blood within the head, thereby increasing the amount of oxygen to the brain.