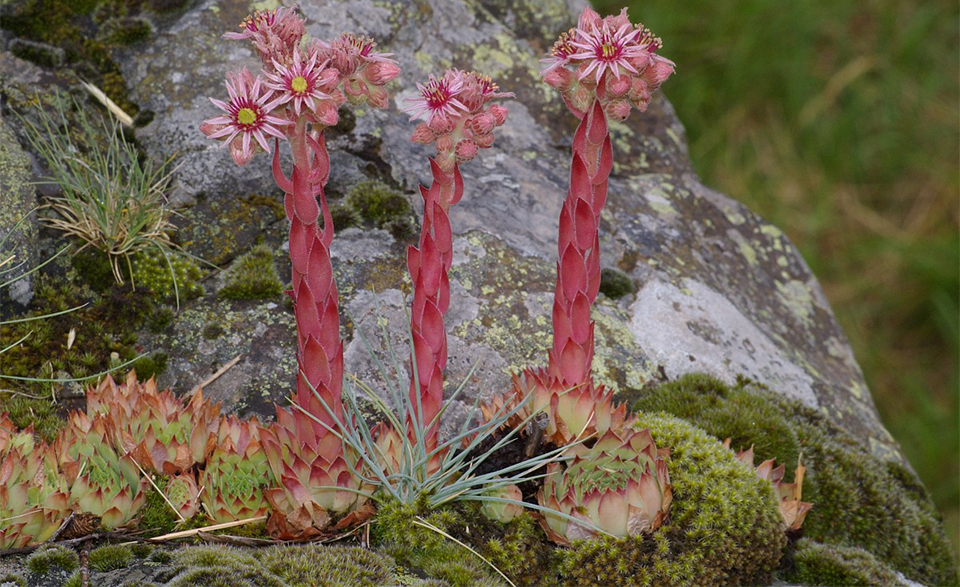 Succulent perennial growing to 4 in (10 cm). Has round rosettes of leaves, and flowering stems bearing clusters of bell-shaped red flowers.

The herb is native to central and southern Europe and now grows wild in northern Europe, North Africa, and western Asia, preferring sandy dry soil. Houseleek is widely cultivated as a garden plant. The leaves are picked in summer.

The Frankish King Charlemagne (742–814 CE) told his subjects to plant houseleek on their roofs, as the plant reputedly warded off lightning and fire.

Houseleek leaves and their juice are used for their cooling and astringent effect, being applied externally to soothe many skin conditions, including burns, wounds, boils, and corns. As with many other remedies that are both astringent and soothing, houseleek simultaneously tightens and softens the skin.

Traditionally, the leaves have been chewed to relieve toothache, and the juice has been sniffed to stop nosebleeds. Houseleek is still used externally, but internal use of this herb is not advised because in large doses it will induce vomiting.

Do not take houseleek internally.