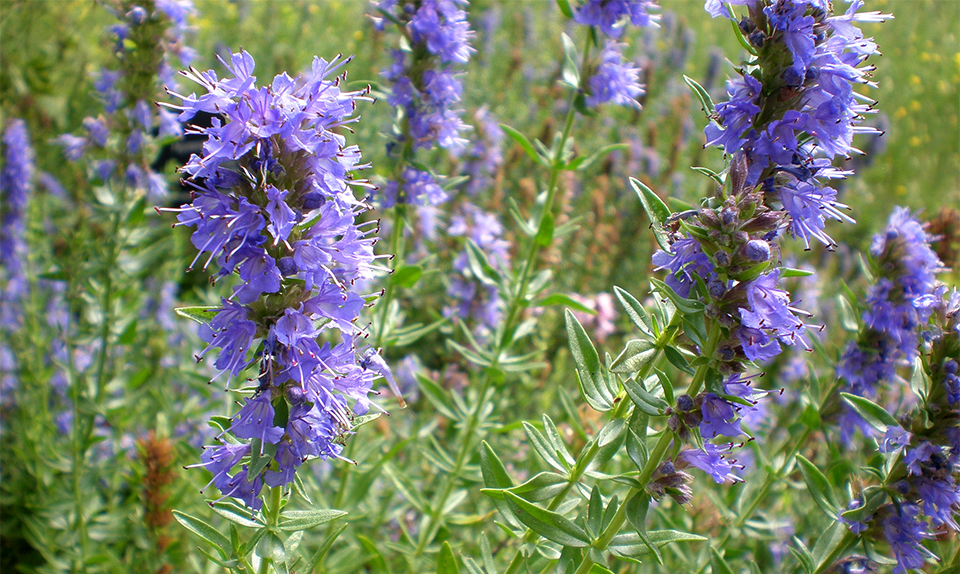 Native to southern Europe, hyssop grows freely in Mediterranean countries, especially in the Balkans and Turkey. It prefers sunny, dry sites and is a common garden herb. The flowering tops are harvested when the plant is in flower in summer.

Contains terpenes (including marubiin, a diterpene), a volatile oil (consisting mainly of camphor, pinocamphone, and betapinene), flavonoids, tannins, and resin. Marubiin is a strong expectorant. Pinocamphone is toxic, and the volatile oil can cause epileptic seizures.

In the past, hyssop was so highly esteemed it was regarded as a virtual cure-all. An old saying went, “Whoever rivals hyssop’s virtues, knows too much.” In the 1st century CE, Dioscorides recommended a recipe containing a mixture of hyssop, figs (Ficus carica), rue (Ruta graveolens), honey, and water for treating a number of conditions, including pleurisy, asthma, tight-chestedness, respiratory congestion, and chronic coughs.

Currently an undervalued medicinal herb, hyssop is potentially useful as it is both calming and tonic. It has a positive effect when used to treat bronchitis and respiratory infections, especially where there is excessive mucus production.

Hyssop appears to encourage the production of a more liquid mucus, and at the same time gently stimulates expectoration. This combined action clears thick and congested phlegm. Hyssop can irritate the mucous membranes, so it is best given after an infection has peaked, when the herb’s tonic action encourages a general recovery.

As a sedative, hyssop is a useful remedy against asthma in both children and adults, especially where the condition is exacerbated by mucus congestion. Like many herbs with a strong volatile oil, it soothes the digestive tract and can be an effective remedy against indigestion, gas, bloating, and colic.