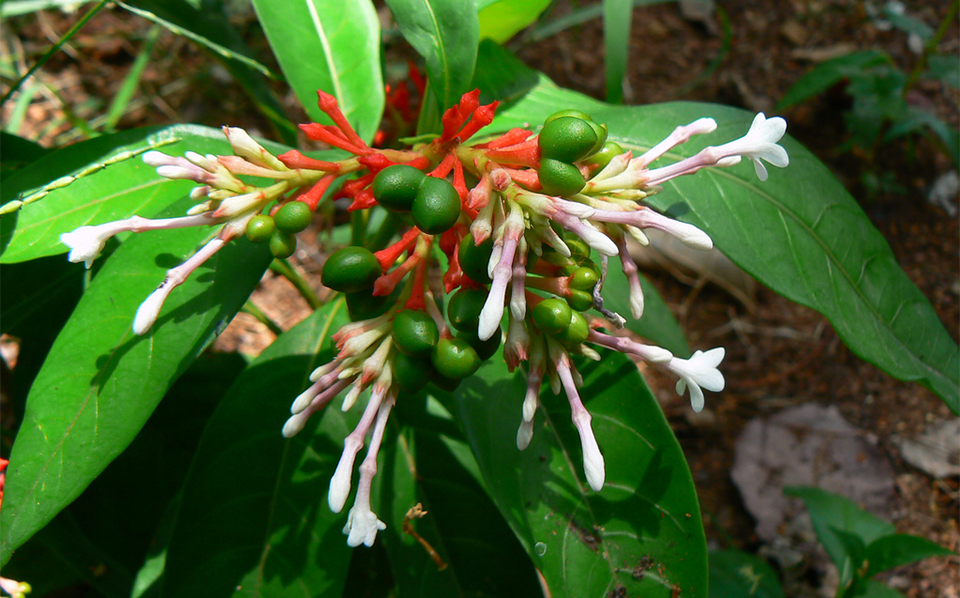 Indian snakeroot is native to much of southern and southeastern Asia, including India, Malaysia, and Indonesia. It is widely cultivated for medicinal use, notably in India and the Philippines. The root of plants at least 18 months old is unearthed in late winter.

Indian snakeroot contains a complex mixture of indole alkaloids, including reserpine, rescinnamine, ajmaline, and yohimbine. Ajmaline has been used to regulate heartbeat.

Indian snakeroot is listed in the Charaka Samhita, the earliest Ayurvedic medical text (c. 400 BCE). The plant has been used since at least that time to treat mental illness and insomnia. Indian snakeroot’s status as a healing plant was first recorded in Europe in 1785, but it was not until 1946 that conventional Western medicine recognized the herb’s efficacy. After that date, the whole plant, and its reserpine extract in particular, were widely used in conventional medicine to lower high blood pressure and lessen the symptoms of mental illness.

Indian snakeroot is useful in the treatment of high blood pressure and anxiety. The root has a pronounced sedative and depressant effect on the sympathetic nervous system. By reducing the system’s activity, the herb brings about the lowering of blood pressure. It may also be used to treat anxiety and insomnia, as well as more serious mental health problems such as psychosis. Indian snakeroot is a slow-acting remedy and it takes some time for its effect to become fully established.

As indicated above, Indian snakeroot and its alkaloids have been extensively researched since the 1930s. Despite concerns raised in the medical journal The Lancet in 1974, there is little evidence to show that the root has serious side effects at normal dosage.

The West African species R. vomitoria is used as a sedative, aphrodisiac, and anti-convulsant in traditional African medicine.

Take only under professional supervision. Indian snakeroot is subject to legal restrictions in some countries.