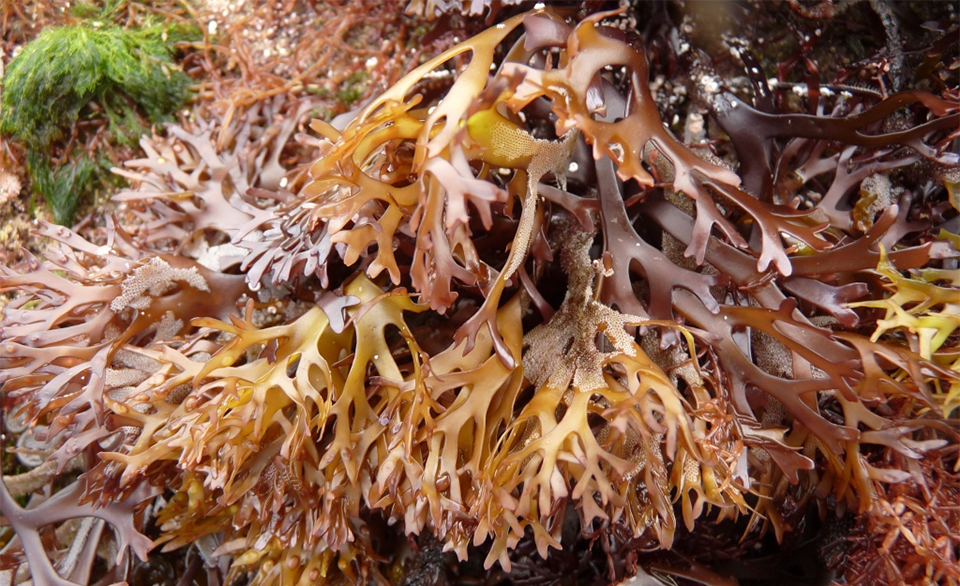 Reddish-brown seaweed growing to 10 in (25 cm). Plant body is flat and forked, with a fan-shaped outline.

Irish moss is found on the Atlantic coasts of Europe and North America. It grows just below the waterline, attached to rocks and stones. In summer in North America, and in autumn in Ireland, it is pulled up by hand or with a rake at low tide and dried in the sun.

Irish moss contains large amounts of polysaccharides, proteins (up to 10%), amino acids, iodine, and bromine, plus many other minerals. The polysaccharides become jelly-like and demulcent when the plant is immersed in water.

Irish moss is used extensively in the food and pharmaceutical industries as an emulsifying and binding agent, for example in toothpastes.

A useful demulcent and emollient, Irish moss is mainly taken for coughs and bronchitis. Its expectorant effect encourages the coughing up of phlegm, and it soothes dry and irritated mucous membranes. It is of value for acid indigestion, gastritis, and urinary infections such as cystitis. For these conditions it is normally combined with other appropriate herbs. Mucilaginous in texture and slightly salty in taste, Irish moss makes a valuable nutrient in convalescence. Applied externally, this emollient herb soothes inflamed skin. Irish moss also acts to thin the blood.

Due to its blood-thinning property, carragheen should not be used by people taking anticoagulant medicines.