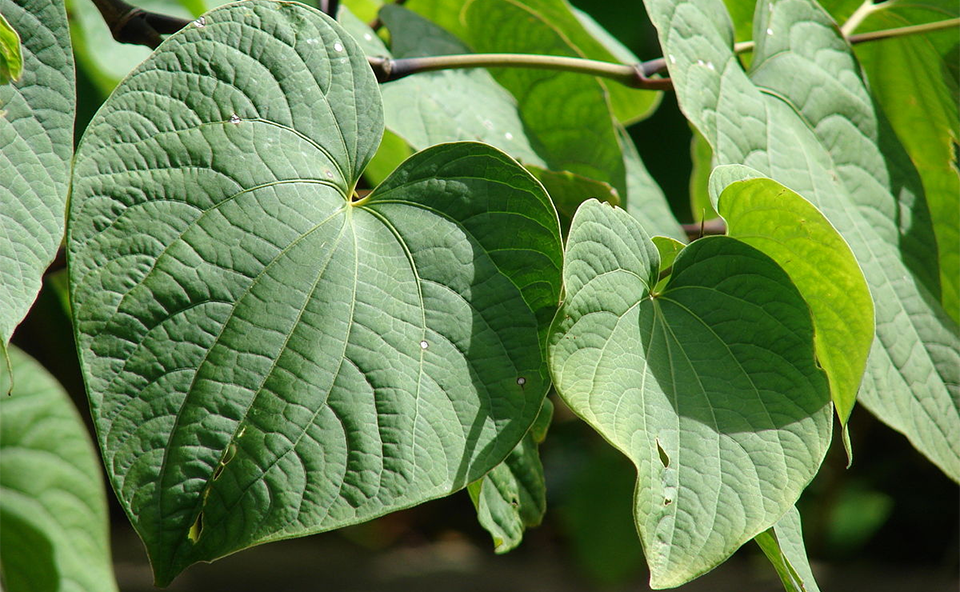 Kava has major ritual and cultural significance among the peoples of the Pacific Islands, where it is as much a part of daily social life as coffee is in the West. At modest doses, kava is calming and tranquilizing. At large doses, it leads to intoxication and euphoria, though without a hangover the next day. It has a hot, slightly aromatic and bitter taste and leaves the mouth feeling slightly numb.

Kava is an indigenous Polynesian vine and grows throughout the Pacific Islands as far east as Hawaii. It is cultivated commercially in parts of the U.S. and in Australia. Kava is propagated from runners in late winter or early spring and is usually grown on frames. It needs well-drained, stony soil and a shady position. The root is harvested at any time of year.

The closely related P. sanctum is native to Mexico. It is similar to kava in many ways; for example, it also contains kava lactones and is traditionally taken as a stimulant. Other related species include matico, betel, cubeb, and pepper (P. angustifolia, P. betle, P. cubeba and P. nigrum).

German ban: In 2002, German regulators banned kava products due to concerns that extracts were toxic to the liver and had led to 20 deaths. Many other countries followed Germany’s example. The ban was repealed by the German authorities in 2015. Those campaigning against it had long maintained that the traditional use of kava, especially water-based extracts of kava, were inherently safe.

Australian regulators had adopted this approach in 2003 by allowing the sale of water-based extracts of kava. A rigorous reexamination of the 20 fatal cases found that only two cases could in any way be attributed to the use of kava.

Anxiety: A 2003 review of kava found that “compared with placebo, kava extract is an effective symptomatic treatment for anxiety.” The authors commented that “few adverse events were reported in the reviewed trials.” Kava is non-addictive, and clinical evidence suggests it is also a safe and effective treatment for anxiety linked with depression, for insomnia, and for pain relief.

Traditional aphrodisiac: Kava is valued in the South Sea Islands as a calming and stimulating intoxicant. It produces a euphoric state when taken in large quantities.

Relaxing remedy: Kava is a safe and proven remedy for anxiety that does not cause drowsiness or affect the ability to operate machinery. It is valuable for treating muscle tension as well as emotional stress.

Pain relief: With its tonic, strengthening, and mildly analgesic properties, kava is a good remedy for chronic pain, helping to reduce sensitivity and to relax muscles that are tensed in response to pain.

Arthritic conditions: The analgesic and cleansing diuretic effect of Kava often makes it a beneficial herb for treating rheumatic and arthritic problems such as gout. It helps to bring relief from pain and to remove waste products from the affected joint.

Antiseptic: Kava is routinely used by peoples of the South Pacific to treat infection, especially where pain is a key symptom. In New Guinea, it is taken to soothe and treat sore throats and to relieve toothache. It makes a valuable urinary antiseptic and will help in treating cystitis, urethritis, urinary frequency, and bladder irritability.