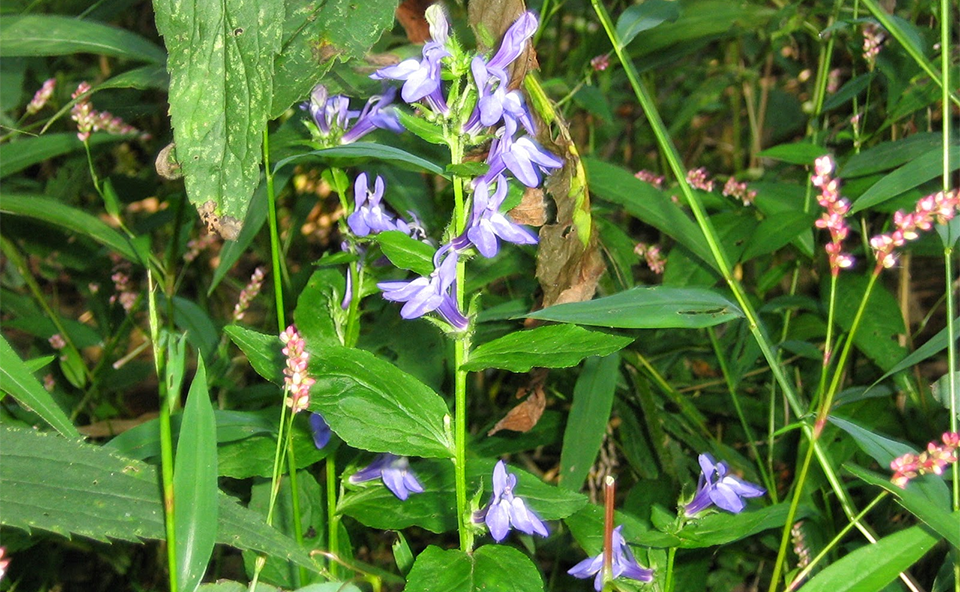 Lobelia is a powerful antispasmodic used for respiratory and muscle disorders. In common with other Lobelia species, it was a traditional Native American remedy for many conditions. It was used as a “puke weed” to induce vomiting, as a remedy for worms and venereal disease, and as an expectorant. Lobelia was also smoked as a substitute for tobacco, and was reputed to share some of its magical qualities.

An indigenous American plant, lobelia is found in much of North America, especially in eastern parts of the U.S. It grows by roadsides and in neglected areas, and prefers acid soil. The aerial parts are harvested in early autumn, when the seed capsules are most numerous, and are carefully dried.

At least 4 other Lobelia species were traditionally used by Native Americans. One, great lobelia (L. siphilitica), as its Latin name suggests, was credited by Native Americans and European settlers with the power to cure syphilis. Chinese lobelia (ban bian lian, L. chinensis) is used in Chinese herbal medicine mainly as a diuretic and for snake bite.

Therapeutic properties: The whole herb is strongly antispasmodic. The constituent lobeline stimulates the respiratory center within the brain stem, producing stronger and deeper breathing. Laboratory investigations during the 1990s suggest that lobeline has antidepressant activity.

Respiratory problems: A powerful antispasmodic and respiratory stimulant, lobelia is valuable for asthma, particularly bronchial asthma, and chronic bronchitis. The herb helps to relax the muscles of the smaller bronchial tubes, thereby opening the airways, stimulating breathing, and promoting the coughing up of phlegm. In the Anglo-American herbal tradition, lobelia has always been combined with cayenne (Capsicum frutescens); the heating, stimulant action helps to push blood into areas that lobelia has relaxed.

External applications: Some constituents, especially lobeline, break down rapidly in the body, and lobelia is often most effective applied externally. Its antispasmodic action helps to relax muscles, particularly smooth muscle, making it useful for sprains, and back problems where muscle tension is a key factor. In combination with cayenne, lobelia has been used as a chest and sinus rub.

Tobacco addiction: The piperidine alkaloids, especially lobeline, have similar chemical effects to nicotine, found in tobacco (Nicotiana tabacum), and lobelia is employed by herbalists to help patients give up smoking.