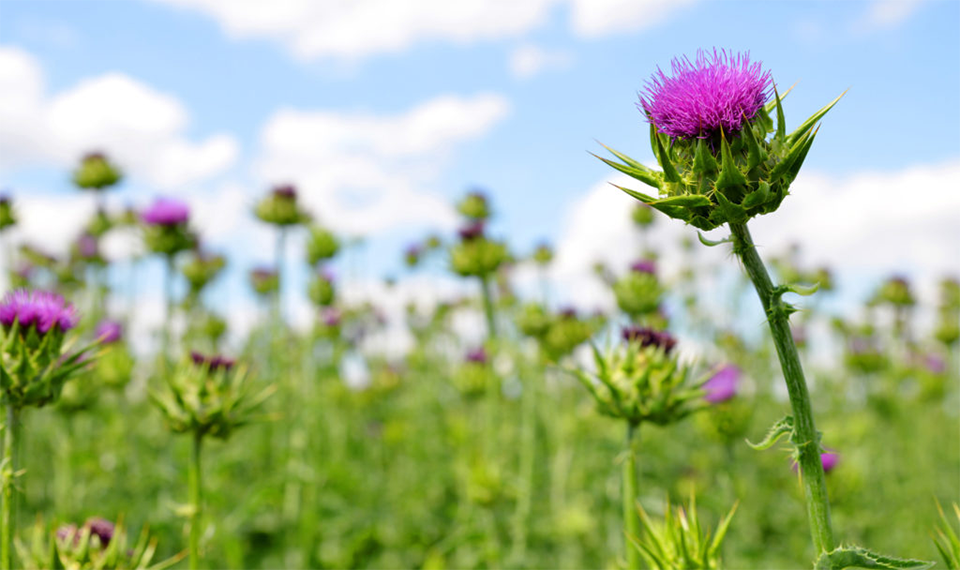 Milk thistle has been used in Europe as a remedy for depression and liver problems for hundreds, if not thousands, of years. Recent research has confirmed traditional herbal knowledge, proving that the herb has a remarkable ability to protect the liver from damage resulting from alcoholic and other types of poisoning. Today, milk thistle is widely used in the West for the treatment of a range of liver conditions.

Native to the Mediterranean, milk thistle grows throughout Europe and is naturalized in California. It grows wild, thriving in open areas, and is cultivated as an ornamental plant. Milk thistle likes a sunny position and self-seeds readily. The flower heads are picked in full bloom in early summer and the seeds are collected in late summer.

Silymarin: German research from the 1970s onward has focused on silymarin, a substance contained in the seeds. This exerts a highly protective effect on the liver, maintaining its function and preventing damage from compounds that are normally highly toxic. It has been shown that severe liver breakdown, resulting from ingesting carbon tetrachloride or death cap mushrooms, can be prevented if silymarin is taken immediately before, or within 48 hours. In Germany, silymarin has been used successfully to treat hepatitis and liver cirrhosis.

Traditional uses: Milk thistle flower heads, boiled and eaten like artichokes, were useful as a spring tonic after the winter months when people had been deprived of fresh vegetables. They were also taken to increase breast-milk production, and were considered excellent for melancholia (depression), which was traditionally associated with the liver. Gerard states in his Herball of 1597, “My opinion is that this [milk thistle] is the best remedy that grows against all melancholy diseases.”

Liver disorders: Today, milk thistle is the main remedy used in Western herbal medicine to protect the liver and its many metabolic activities, and help renew its cells. The herb is used in the treatment of hepatitis and jaundice, as well as in conditions where the liver is under stress—whether from infection or excess alcohol, or from chemotherapy.