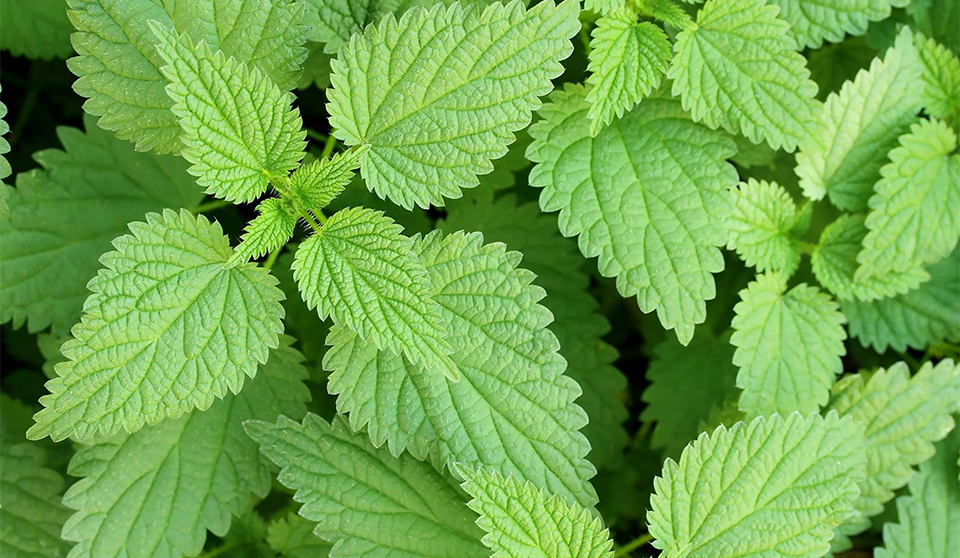 Known for its sting, nettle has long been appreciated for its medicinal uses. In the 1st century CE, the Greek physician Dioscorides listed a range of uses—the fresh chopped leaves as a plaster for septic wounds, the juice for nosebleeds, and the cooked leaves mixed with myrrh to stimulate menstruation. Today, nettle is used for hay fever, arthritis, anemia, and, surprisingly, even for some skin conditions.

Nettle grows in temperate regions worldwide. The shoots are picked in spring for use as a tonic and a vegetable. Aerial parts are picked in summer when the plant is in flower. The root is harvested in autumn.

The annual nettle (U. urens) is used in similar ways to U. dioica. Roman nettle (U. pilulifera) was the species most used by the Romans for “urtication” (beating with nettles to encourage blood to the surface), which they did to keep themselves warm.

Root: Clinical trials over the past 20 years have supported the root’s use in treating an enlarged prostate and easing lower urinary tract symptoms, though several tested it in combination with saw palmetto (Serenoa repens) rather than on its own.

Anti-arthritic: Studies into nettle’s benefit in osteoarthritis have had mixed results, though a 2009 French trial found it reduced patients’ required daily intake of anti-inflammatories when combined with Vitamin E, zinc, and fish oil.

Seeds: Results of a 2009 Iranian laboratory study suggested that the seeds are antioxidant and protect liver function.

Cleansing: Nettle’s key traditional use is as a cleansing, detoxifying herb. It has a diuretic action, possibly due to its flavonoids and high potassium content, and increases urine production and the elimination of waste products. It helps many skin conditions and arthritic problems.

Astringent: Nettle slows or stops bleeding from wounds and nosebleeds, and is good for heavy menstrual bleeding. Allergies Nettle is anti-allergenic. It treats hay fever, asthma, itchy skin conditions, and insect bites. The juice can be used as a treatment for nettle stings.