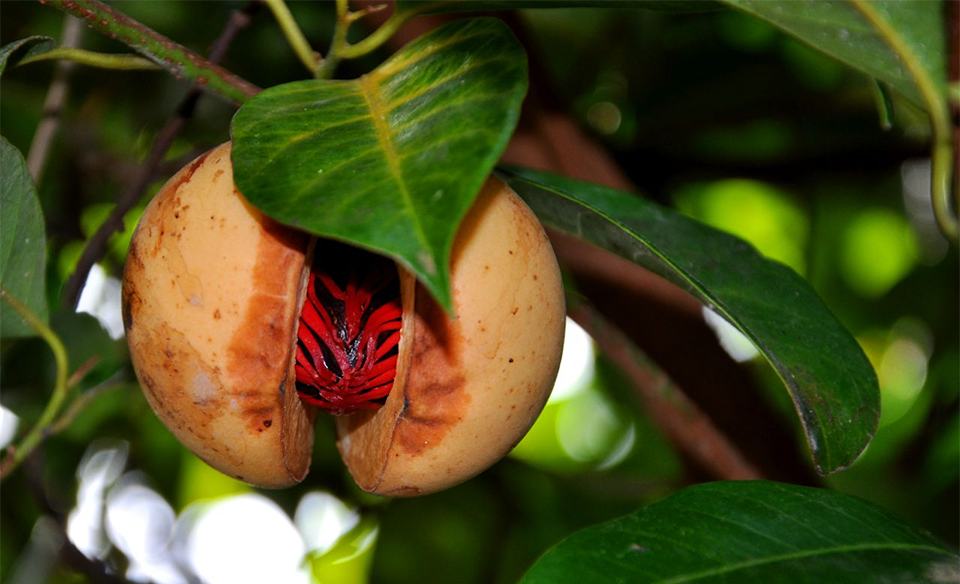 Nutmeg and mace both come from the nutmeg tree and have very similar medicinal properties. They are infrequently used in the West because of their toxicity at high dosages, but nonetheless are important medicines, employed principally to stimulate digestion and to treat infections of the digestive tract. Nutmeg also has long been valued as an aphrodisiac and as a remedy for eczema and rheumatism.

Native to the Molucca Islands of Indonesia, nutmeg trees are now widely cultivated. They are propagated from seed, sown when ripe. The tree yields fruit after about 8 years, and can continue to fruit for over 60 years. The fruit is picked when ripe and the nutmeg and mace are separated and dried.

Digestive problems: Nutmeg essential oil has an anesthetic and stimulating effect on the stomach and intestines, increasing appetite and reducing nausea, vomiting, and diarrhea. It is a helpful remedy for many digestive problems, especially gastroenteritis.

Sleep aid: Though nutmeg is a stimulant, it has narcotic and anti-convulsant properties and can be successfully used at low dose (a pinch of powder will do) as a sleep aid for short- or long-term sleep problems. Laboratory studies also indicate that nutmeg has antidepressant activity.

Aphrodisiac: In India, nutmeg has a long reputation as an aphrodisiac. It is believed to increase sexual stamina.

External uses: Ointments based on the fixed oil (nutmeg butter) are used to treat rheumatic conditions. They have a counter-irritant effect, stimulating blood flow to the area. In India, nutmeg is ground into a paste and applied directly to areas of eczema and ringworm.

Safety: Low medicinal doses and culinary amounts of nutmeg and mace are safe. In excess, however, the herbs are strongly stimulant, hallucinogenic, and toxic. The consumption of just two whole nutmegs has been known to cause death.