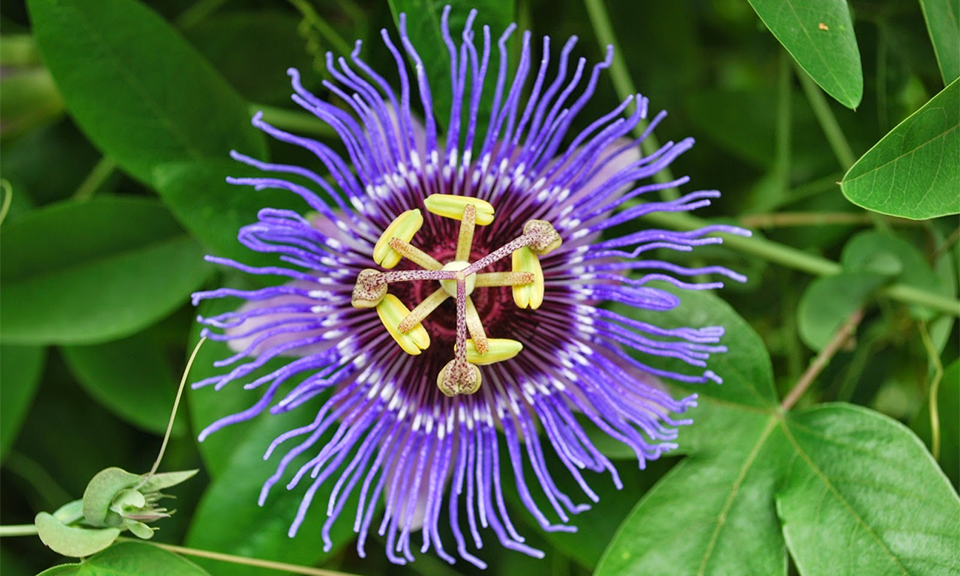 Passionflower’s name comes from its beautiful flowers, thought to represent Christ’s crucifixion—5 stamens for the 5 wounds, 3 styles for the 3 nails, and white and purple-blue colors for purity and heaven. The herb has valuable sedative and tranquilizing properties and has a long use as a medicine in Central and North American herbal traditions, being taken in Mexico for insomnia, epilepsy, and hysteria.

Native to the southern U.S. (Virginia, Texas, and Tennessee) and to Central and South America, passionflower is now extensively cultivated in Europe, notably in Italy, as well as in North America. It is propagated from seed in spring and needs plenty of sun. The aerial parts are gathered when the plant is flowering or in fruit.

There are approximately 400 Passiflora species, some of which are popular garden plants. A number have a similar sedative action to passionflower. P. quadrangularis has been found to contain serotonin, one of the main chemical messengers within the brain.

Tranquilizing properties: Pharmacological research shows the herb to have sedative, tranquilizing, and sleep-inducing properties. A 2001 clinical trial found that passionflower was as effective in relieving anxiety as oxazepam, a conventional tranquilizer, and had fewer reported side effects. A clinical study in 2011 found improvement in subjective sleep quality in those taking passionflower.

Insomnia: Passionflower is best known as a remedy for insomnia and disturbed sleep patterns, and is useful for short-term bouts of sleeplessness.

Gentle sedative: This herb is widely acknowledged to be a good medicine for anxiety, tension, irritability, and insomnia. Its gentle sedative properties produce a soothing and relaxing effect, reducing nervous activity and panic, and making it a mild and non-addictive herbal tranquilizer, comparable in some ways to valerian (Valeriana officinalis). Occasionally, it is prescribed for convulsions.

Pain relief: Passionflower has valuable painkilling properties and is given for toothache, period pain, and headaches.

Tranquilizing effects: Its ability to reduce anxiety makes passionflower valuable for many nervous states, and it is used to treat conditions as diverse as asthma, palpitations, high blood pressure, and muscle cramps. In each case, its antispasmodic and tranquilizing properties are the key to its usefulness, reducing the over activity responsible for the disorder.