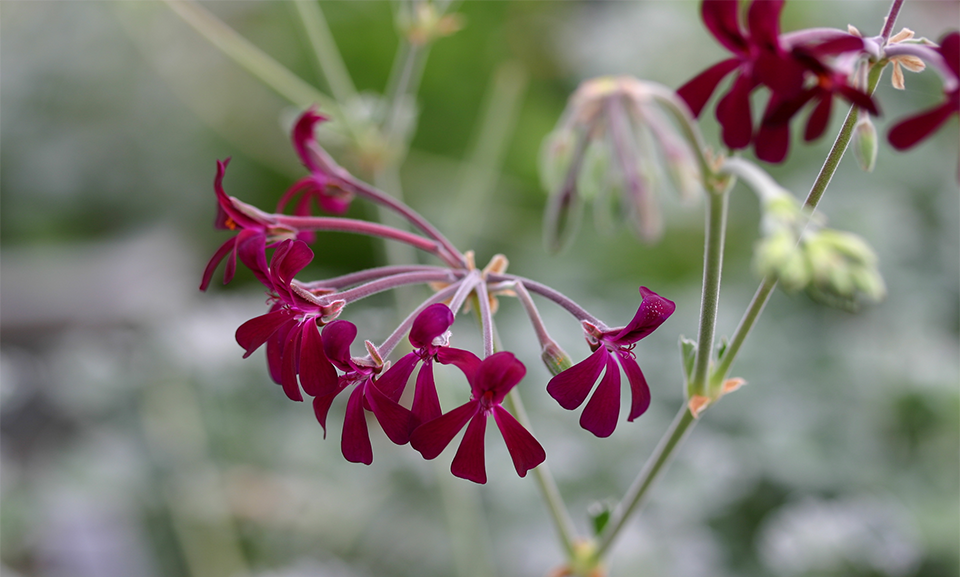 Known as umckaloabo (thought to mean “heavy cough” in Zulu), pelargonium has been used for centuries by traditional South African healers as a key remedy for coughs and respiratory infections and for gastrointestinal disorders. The herb came to the attention of Europeans in the early 1900s after an Englishman named Charles Stevens was cured of his tuberculosis by a Basuto traditional healer who had given him large doses of pelargonium root.

Pelargonium is still collected from the wild in the eastern parts of South Africa where it is native, though demand for the root has led to increased commercial cultivation. The root is harvested at the end of the growing season, sliced, and then kiln dried. The plant is mostly propagated from seed.

Many other geranium species have medicinal activity, including another South African species, P. reniforme, which is often used for the same indications. The closely related American cranesbill and herb robert (Geranium maculatum and Geranium robertianum) are strongly astringent in action.

Antimicrobial: Pelargonium extracts have been shown to have strong activity against a wide range of bacteria, notably those commonly responsible for ear, nose, throat, and chest infections. Extracts have also been shown to act against herpes viruses. The root exerts a tonic effect on the immune system.

Upper respiratory tract problems: German research over the last 15–20 years has established conclusively that pelargonium is a safe and effective treatment for problems affecting the upper respiratory tract and chest. Clinical trials have shown that it is an effective treatment for acute and chronic bronchitis, tonsillitis, sinusitis, and the common cold, reducing the intensity of symptoms and speeding recovery.

Children’s remedy: Unusually, several clinical trials have focused on treating respiratory infections in children, and the results of these indicate that pelargonium is a very safe and well-tolerated medicine for children (from 1-year-old) with coughs, colds, sore throats, and sinus problems.

Traditional African remedy: Pelargonium has a much wider range of uses in South Africa, where the root has been used to treat not only respiratory infections, including tuberculosis, but conditions as diverse as painful periods, liver disease, and gastroenteritis.